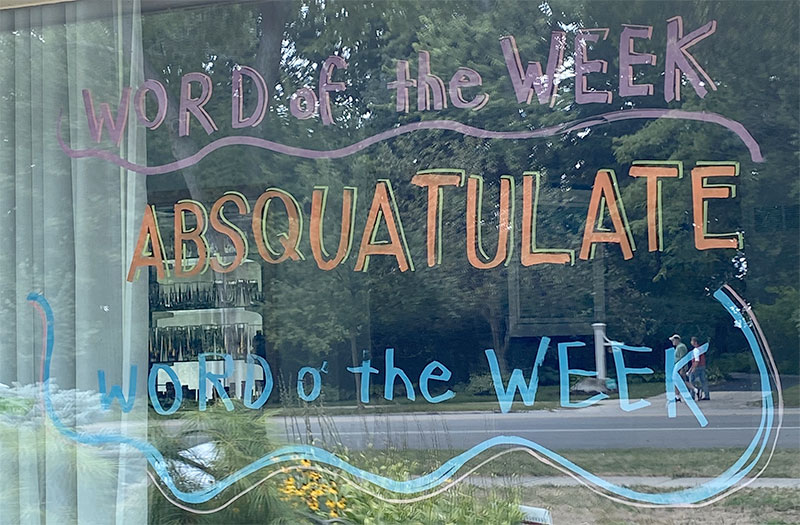 Of Time and Squeaky Markers: The Story of The Words of the Week

In the early days of lockdown I was inspired by pictures on social media of the many creative ways people were seeking to ease its pain and share messages of uplift. Children and parents with an artistic streak were leaving love notes in chalk on sidewalks outside care homes. Hand-made signs broadcasting heartfelt gratitude for essential workers crowded street corners. People were singing and playing music on their porches.

So inspired, I went to Amazon. I bought boxes and boxes of chalk and a pack of neon window markers.

Now I had to figure what to do with them.

I had some skills at drawing. But nothing came into my head. I had an enormous canvas of three, seven-foot-wide windows in my mid-century modern house that faced the thoroughfare of Lake Drive. Runners, walkers, bikers – families on strolls with wagons and dogs. People were seeking refuge on my street, with its bowering trees and the occasional awe-inspiring view of Lake Michigan’s expansive horizon. I had a significant audience should I figure out how to engage them.

The thought of chalk between my fingers and my 55-year-old knees against the cement sidewalk quickly lost its enchantment. Plus, April meant rain. Cold rain. What could I do from inside? Standing up?

Words. I loved words. And there was an endless supply of them. And oddly perhaps, as a kid, I was known among my friends for my uncanny ability to write backwards.

I grabbed the neon pink and purple markers, pressed down the tips to let the color saturate the stiff white tips, and wrote “Word of the Week” surrounded by a curling border.

And “Susurrus” in large block letters with an accenting shadow effect. I don’t know why really. Other than I felt the need for softness in a harsh historical moment.

This was April 2020. Doing something weekly felt like a radical act of forcing time, which had become amorphous in this endless pandemic, back into some kind of structure. I hoped to tickle the curiosity of those many passers-by who might need a little distracting. A little intrigue. Something they could stop and ponder for a moment with each other perhaps. Or maybe that was all in my head.

At first my weekly selections were odd words that people most likely wouldn’t know. They had an edge of silliness. Gradually, they started to echo the feelings of the week’s news. Sometimes they were all three – whimsical, intriguing mirrors of the moment. The markers made a horrible squeaking sound that my husband Brad couldn’t tolerate, so he always left the room when I embarked on my Saturday morning vocabulary antics.

People started to stop me when I left the house to go running and offer suggestions. One day, when I was really ready to stop the whole thing (it was a lot to muster the energy to focus in a pandemic…) I found a folded, handwritten note between our front door and screen. It said:

“Thank you for doing the word of the week. I look forward to it every week and I photograph it and share it with my brother and it gives us something to talk about. I know it isn’t easy to do. Thank you.”

So I couldn’t quit. Another day a local TV reporter rang the doorbell and gave me her card saying she would love to do a segment on this. I never called, but I kept going for another couple months. When I left town to go to the cabin, Brad did it for me, squeaky markers and all. I ended it at last when the election was finally called in mid-November. It felt like a spell was broken and time would return.

In hindsight now, I see that what seemed like an unconscious whim was really an homage to my father, whose vocabulary has always inspired me. He and Mom had recently moved to a senior living apartment nearby and were in a swirl of lockdown shock and boredom. If I could stump him, or entertain him, I felt a big win for the week. After I’d write the word of the week, I would photograph it and text it to my dad, who would usually write back later that day using the word in a sentence. Or simply, lifting my heart, “good one!” Occasionally, he would text me suggestions, some of which made the list. I tried to use them to engage my boys (18 and 15), but honestly, I don’t even think they noticed them. Just another weird thing
mom was doing.

It was weird. But it felt good.

I share the list now mostly so I remember them and this 30-week stretch of history. But I also share them in the hopes that maybe the weekly words can have a new life for others. Maybe share them in an old-fashioned game of dictionary? Make up definitions? Perhaps others can enjoy them beyond my front window. There is a lot of heart in them. And hope. Enjoy.

Bumfuzzle: to confuse or fluster

Widdershins: in a direction contrary to the sun’s course, considered as unlucky; counterclockwise.

Pertinacity: a quality of sticking with something, no matter what. It’s a type of persistent determination.

Calumny: the making of false and defamatory statements about someone in order to damage their reputation; slander.

Perspicacity: the quality of having a ready insight into things; shrewdness.

Balter: to dance artlessly, without particular grace or skill but usually with enjoyment

Miscreant: a person who behaves badly or in a way that breaks the law.

Cacoethes: an irresistible urge to do something inadvisable.

Mistigris: a joker or blank card that the holder can play as any card

Petrichor: a pleasant smell that frequently accompanies the first rain after a long period of warm, dry weather.

Obnubilate: darken, dim, or cover with or as if with a cloud; obscure.

Pother: a commotion or fuss.

Obelus: a symbol of death or division, used in ancient manuscripts to mark a questionable passage

Panegyric: a public speech or published text in praise of someone or something

Jeremiad: a long, mournful complaint or lamentation; a list of woes

Anodyne: not likely to provoke dissent or offense; inoffensive, often deliberately so

Certified Facilitator Spotlight: Mollie Heiden
Certified Facilitator Spotlight: Teresa Hunt
We use cookies on our website to give you the most relevant experience by remembering your preferences and repeat visits. By clicking “Accept”, you consent to the use of ALL the cookies.
Do not sell my personal information.
Cookie settingsACCEPT
Manage consent