The man is the one who trains it. "That's a good one," says Roberta! The bird definitely looks like an eagle. We don't know why he has the bird there.

The man is possibly having a drink while he is walking away. The man's name is John. Ellen likes the name John. Roberta says, "Everyone is John!" Pam says, "John is easy"!

The bird's name is Umberto della Ricco! The man is feeling good!

It's taking place in Montreal. Paul's father had a lot of birds like this a long time ago.

John may own the bird. Perhaps he is taking the bird home. John has something to drink.

We would hear the sound of the eagle's wings moving. Paul flaps his arms to demonstrate. Roberta thinks the bird is looking after the man!

The bird, Umberto della Ricco, is very clever and can speak seven languages. It can fly high in the sky like an astronaut. John would show the eagle what to do and how to catch food.

Pam sees a bird, a man, and a cup! He may be drinking his coffee. John puts his arm out and the bird lands on it. 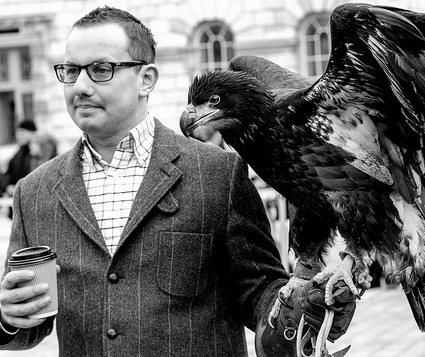