A Day at the Beach

Four guys are gettin' out of the surf.
They're at the beach - they're quite a distance from the water.
One of 'em's madder than all get out, that one on the end - he doesn't want to be there. He's mad 'cause he could have a sunburn.
The one on the other end's got goose grease in his hair to make it look nice - very slick, it shines in the dark, it's luminescent!
They all have the same kind of socks.
It's hot weather: they're at Palm Beach in the 1960s - it's about 11:30 in the morning based on the shadows.
We hear the surf, the waves, the seagulls, you can probably hear the nickelodeon over at the club.
We see the white caps.
We smell salt water, salt air, sewage, dead fish, armpits. They can smell the barbecue from the restaurant.
Three of the four are happy and the other one is not: he's a garbage man and he doesn't want to be there and he's tired of all that smell.
They work in the same office: they've worked together for ten years in the Public Works Department.
They're practicing for a show they're going to do at the Hunt - a dance routine in the pool area and we're all gonna be in the pool. That just proves that we're all wet.
They have a very close relationship.
It's their day off. They believe in the fact that they're gonna do the show which is why they're doing it.
They're raising money to buy new uniforms. The guy on the end is the treasurer.
One of them says, "That's showbiz!"
They are Eenie, Meenie, Minie, and Mo.
They're all bachelors.

Eenie: he's on a diet. He looks terrible. He doesn't have a family. He's very happy, he's havin' a ball and they're all very happy. He's the happiest one and he just wants to be with these guys. He doesn't know how to put his leg up for the dance. He needs to go see Arthur Murray.

Meenie: He's much happier, thrilled. He loves gettin' in the water, having the sand run through his feet. His favorite part is that they're gonna go have a beer after it's done. The guy on the end (Mo) is gonna pay for it. It's during prohibition so they have to go to a secret tavern. He's very happy to be there. He has no big dreams, why would he? He seems well-adjusted.

They do this every day on their day off.
They saw their shadows like Puxatawney Phil.

Minie: He's dressed up a little more than the others. He likes color, he's got character, he's got a mustache, he's bald. He's the joker. He's the one that owns the car that brought them there. I think he likes being at the beach with these guys, he's very happy. Look at the size of his head compared to the others - pretty small head, no hair. Maybe not a lot of brains in there. There's something feminine about him.

Mo: He looks like a bully. He's really bored, he'd rather be back at the office counting the money. He'd rather be eating. He's the one that drives the car, that's why he's there. He doesn't like the dance, he's not very happy. Maybe he'll be embarassed by the dance. I wouldn't want to get in the ring with him. He's fatter than the others. He looks like he's ready to bop somebody. He's really one unhappy guy.

A bystander took the picture.
Before this, they had breakfast: scrambled eggs and bacon.
They went swimming, took more pictures, they had a beer. Mo is the only one who didn't drink a beer, he's saying they're crazy.
After, they're gonna swim, stretch out in the sand, go on the beach lookin' for chicks, then go home and mow the lawn.
Eenie and Mo got chicks.
Fortunately, he still doesn't have a wife. 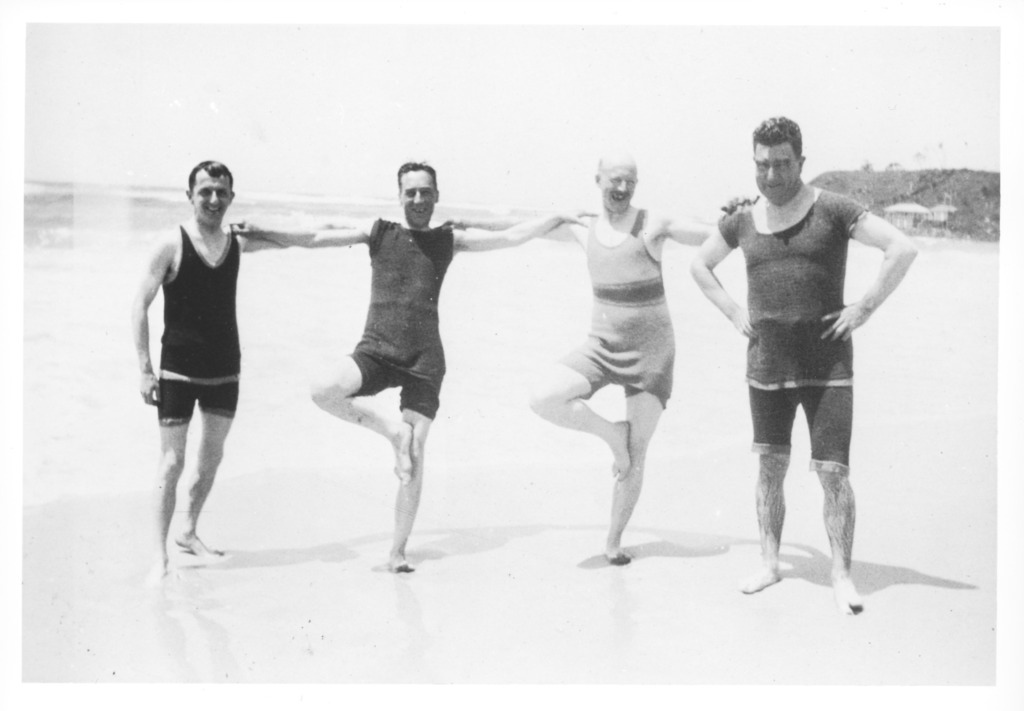