A Day at the Fair

This is State Fair and Richard or Grandpa Ed is playing the violin. Maybe it's a guitar. That's Sam and Doris walking by. They are in Mukwonago on the fair grounds.

It costs $10 to get in. Everything costs money. If you don't have money, you can't get in. You could sneak into the fair, cheap. Ed did that at the air show in Oshkosh.

They will look at animals and go on rides. There's farm animals--pigs, sheep, horses, chickens, ducks, goats, and cows. Dogs and cats too. And a moose!

We'll go on a roller coaster, the ferris wheel that goes way up in the sky and then down again, and the merry-go-round.

We'll eat hamburgers, hot dogs, ice cream, sodas,popcorn, ribs and pizza; and drink lots of good beer--Pabst beer. And cream puffs! You can get a dessert. Grandpa Ed will have an egg in his beer.

Ed wants to hit the thing with the hammer and ring the bell at the top and get a prize, a good prize.

Richard or Grandpa Ed's guitar is a magic guitar. It makes people disappear. Kenneth's parents have elves in the house. Grandpa came from Chicago. He's going to make himself disappear.

They have policemen at the fair so you don't get robbed.

Sam and Doris are just walking by. We're pretending that they are Kenneth's parents. They can look at the stars and the moon and the clouds. They got married years ago. They met at the library. They shoot at targets and win prizes. But the cream puffs is their favorite part of the fair and they love to eat them. Kenneth wasn't there.

Elaine has to park the cars.

You can look at people. You can watch the girls go by and girls watch the men.

There are stage shows. Donna would like to see her husband. You can see a two-headed man or a woman or a mermaid.

Fireworks make nice noise and nice pictures in the sky. Then we watch the rain come down. 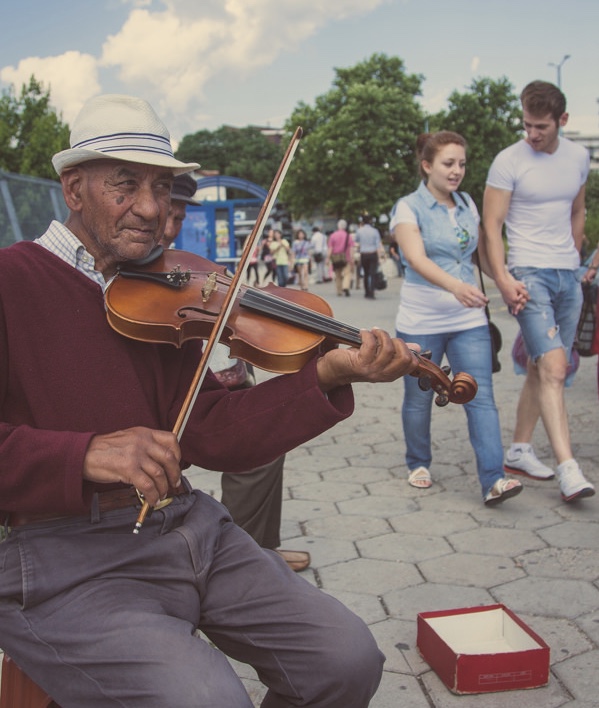