A Day in the Woods

They are singing, something good.
It’s the Star-Spangled Banner.
It’s the Fourth of July!
The boy has a popsicle in his hand.
He has a sweater on.
They are outside somewhere in a park.

It’s either his grandfather or his father...they look alike.
Their names are Robert James (the father) and James Robert (the son).
He is known as Jimmy.

The little boy wanted to get on his father’s back to feel safe.
They are at a National Park...Yosemite National Park.
Or they’re at a park in the city.
There is a building in the background.
"I see woods," says ...
There are squirrels running around.

They are going on a hike.
There won’t be other people on the trail.
They will meet people.
It’s a one day thing.
They’ll be gone for a couple of hours.

Is there a bear in the woods?
They meet a bear on the trail.
That bear is bigger than we are!
Give him the trail!
They hide in the bushes.
They make a lot of noise to make the bear go away.
He is snuffling in the ground.
Sometimes they will come after you.

The humans do not want to meet the bear!
Bears would come every morning. At ten minutes of seven they would come to the house.
If you mess with their cubs, they will kill you.
THE END

By Jean B, Anna, Marcus, Father Jaime, Jim, Rita, Helene and Martha
on May 25 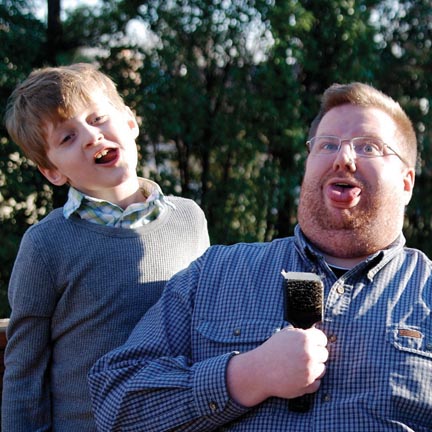