A Patriot Standing Out For His Cause

The man is holding a flag. He's holding back some people. There's something going on in the background. We can't quite figure it out. Is it important?

Ken says, "It looks like a small rebellion." Harry thinks it's a pardae. Maybe it was a story on TV.

It looks like Manhattan, several years ago. Maybe it was the Macy's Parade.

It's probably very noisy. There are crowd sounds because the crowd is pretty packed in there.

I see six stripes on the flag.

His name should be Sour Puss, or American First Type. He's more patriotic than anyone else. He looks somber holding the flag. Maybe it's too heavy. Harry thinks he has an itch and needs to scratch it.

He's wearing a suit. Beats me why he's wearing it. Frank says he may be cold. Maybe he's leading the cause. It's Flag Day.

He doesn't know where he is though, he's lost. The cars are blocked in. Those are old cars.

He looks like he's thinking about the interpretation of what Aerica is to him. He looks like a super patriot in opposition of those behind him. The people in the background are watching another part of the pardade.

He's hoping for more flags. He's not going to get any more. What puzzles him is that he's going that way, the cars are parked that way, but the others are looking the other way. It's all freshnupulled!

What's that emblem on his jacket? It,s an "M" or an "N". It looks like a belt buckle, but it isn't around his waist.

A press photographer took his picture. His picture will be in the paper.

Next, he's going to the front of the parade. He got to do something with the flag. He's got to put it away, back into one of those buildings. The parade is pretty much over.

He'll go look for more people for his cause. But I think the outlook is dim. He looks too mean. He'll probably turn around and go back. 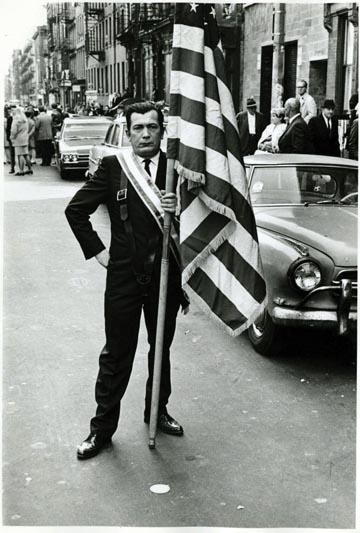