A Vision of a Wise Man

This is Richard Irving Learned and he reminds me of my uncle because I recognize his wings. Richard is related to my mother and my sister. He is a man with all of the tangles in the background. A happy-go-lucky man...

Richard was married to Lucille. She was American and Richard was Chinese/East Indian-American.

They lived in Racine.
They had one daughter named Lucy. And Richard always had a small dog - poodles - in the house.

In front of their nice, little house was a blue spruce Christmas tree. It grew so tall I didn't recognize it. Richard planted the tree and then he had other Christmas trees. Every Christmas they had a different tree in the house; they never cut the blue spruce.

Lucille made insinkerators and Richard didn't do too much work. He may have been retired and collected social security. And Richard had a piano and he liked to play anything.

Richard had an angel spirit. I had a vision of his wings and I became part of him. Richard is smiling because he is a free bird. If he could fly anywhere it would be Menomonee Falls because that is where the Menomonee Indians are.

Richard looks like he is from the bible. Mary had a vision of angel wings at her birth with Jesus. 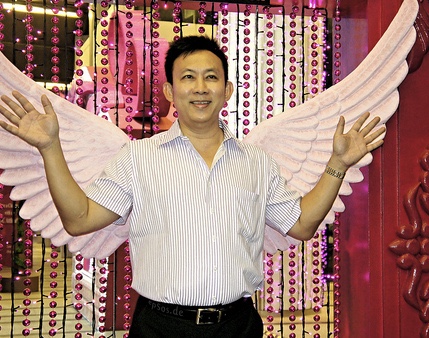