An Interview with H. Hargrove, the Artist

Pam and Elaine were humbled to have the opportunity to interview Mr. H. Hargrove by phone from his home in New Jersey on January 8, 2018. We wanted to know more about his work as an artist and his painting, Summer Cookout, one of our favorite TimeSlips prompts. A print of Summer Cookout hangs in the kitch

Mr. Hargrove told us that he was born on June 16, 1941 in Palermo, Italy but was raised in Marsala, Italy, where he attended Winery college.

We asked him how he came up with the title for “Summer Cookout” and what inspired him to paint a picture of an African American family. “I receive suggestions from everyday people to paint my pictures... they give meaning to my work,” he said. Once, when he was signing autographs, an elderly African American woman suggested he paint a summer cookout and described the scene. He took her advice and painted the scene. He told us that he really likes the Summer Cookout painting. "It really portrays family, a love for God, and everything beautiful from the 40s and 50s.”

“A large audience was responsible for my success,” said Hargrove. He’s had at least 1500-2000 suggestions from people who like his work. He feels "in communion with the audiences."

We wondered if he found it easier to come up with a title before or after the masterpiece is completed. He said that he almost always knows the title first. "I see the main product completed already in my mind, before I am finished with my project."

“I am inspired by everyday life, beauty, meaning and God,” said Hargrove.

Hargrove had an uncle, who was a successful businessman in the U.S. living in Brooklyn, New York. “It was my uncle, who helped me to get my first job in the U.S.” “While in America I completed my citizenship and lived with my uncle. All of my family is still in Italy and I visited every year for two weeks.”

His first impressions of the U.S. was literally “Wow!”. “I liked the buildings and big huge cars," he said. While as a boy in Italy, “I would drool over those big long Cadillacs in the movies. I like to collect old fashioned cars now and have owned 7 or 8 Cadillacs.”

“As far as I could imagine remember I always liked to draw and really liked colored pencils, which I received as a gift on my 10th Birthday. I wasn’t serious about art until after college.” He was trained to be a wine chemist, but made the leap to art when the winery I was working for needed someone to decorate the tasting room.

“My pictures hung in the tasting room at the winery, which is how I was discovered as a painter, because they liked my paintings more than tasting the wine,” said Hargrove. He became a full time artist at the age of 24.

Hargrove has been called a “poet with a paintbrush.” "My paintings are an expression of the world I live in and it’s ever changing," he said. He approaches his work “with a vision to create and challenge myself,while still utilizing the knowledge and techniques I learned along the way over the years." He continued, "I do not limit myself to one style of painting." Mr. Hargrove never had any formal art training.

One of his most celebrated and famous paintings is "From Athens to Atlanta." It was created for the Centennial Olympic Games in 1996. He also painted "The World Is Watching" in 1999 to captivate the spirit of and celebrate the Women’s World Cup Soccer tournament. “I have numerous other paintings and f limited editions starting from as little as $100, while some limited editions reach between $3,000 to $4,000 dollars.”

Because he paints such wonderful scenes of families, we wondered about his family life. “I am happily married to my wife. I have one daughter and two grandchildren.” “I was the lucky one to fulfilled my America Dream," said Hargrove. “I won’t wish no one else to follow down my path, because it is hard work and takes discipline. It is a very difficult career.”

“I am very much a humble man and I value my audience’s opinion about my work. It gives me great satisfaction to know that I have followers of my paintings and that I am widely known in America and throughout the world for my works of art.” 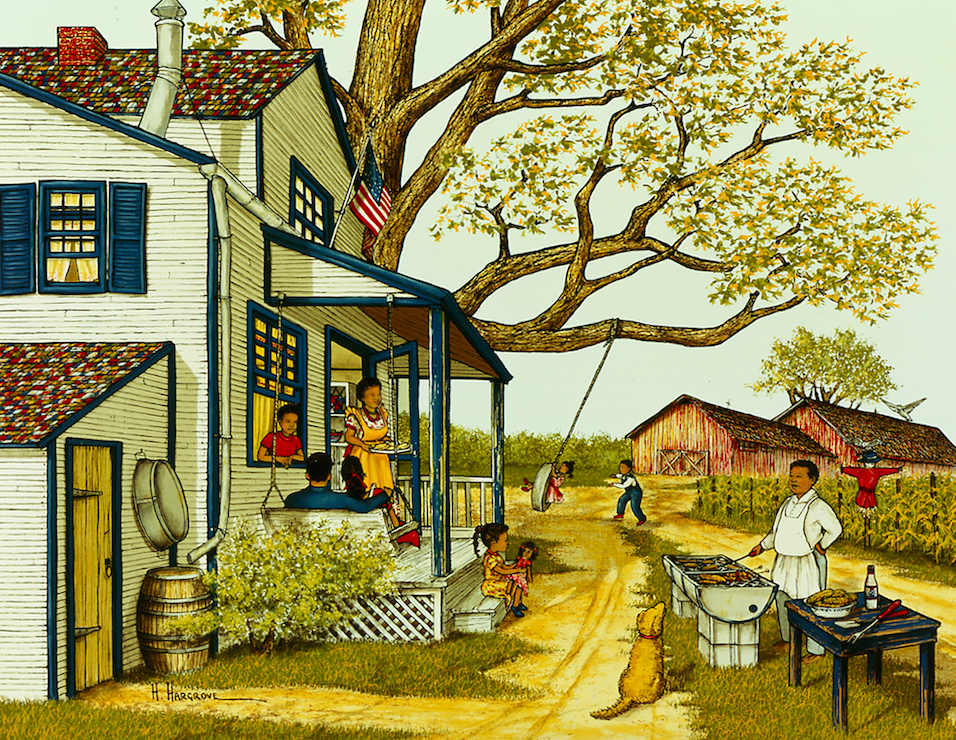 Image Credits: with permission by the artist
Creativity Center View More Like This Report This Story