At The Mardi Gras

It is February, 1941. A dog named King is lookin' good all dressed up with buttons, a joker collar, and a crown for the Mardi Gras celebration parade in Louisiana. King wants to be King of the show! He's happy and getting into the festivities, enjoying the music, and is happy because he's not drunk like the other guys! Everyone else is happy celebrating too.

There is Mardi Gras music going on in the background, people with costumes, horns, drums, and bagpipes in the parade. There are also babies crying in the background because they want candy, which they got plenty of at the parade. There are beads being thrown and lots of good eats and drinks here as well, including alligator. The alligator doesn't taste too bad, like bony chicken! Everyone found what they wanted- something good to eat and drink. King the dog can't talk, so he has to bark to get what he wants.

King has buttons on, but the lady in the background lost her buttons- too much sippin'! There's smokin', drinkin', stealin', and arrests going on. Everyone's celebrating, so we're alright.

King has a small family all with pretty little noses. King's the dad and the wife's at home with their half a dozen baby puppies. Dad's out celebrating the parade! King eventually has to go to bed because he can't stay up all night, so as he is heading home, King sings, 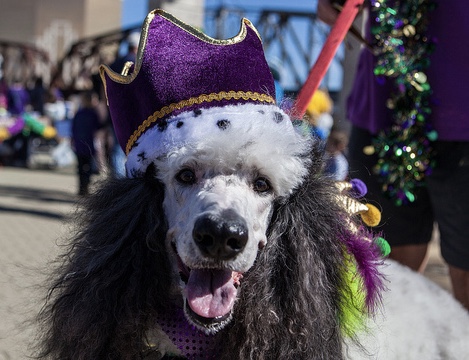