Before the Store Opens

A man is playing guitar
Boy and sister are waiting for the store to open
The kid is scared!
He's waiting for the bathroom
It takes place at the mall, by the railroad tracks
There are trees in the back, Eucalyptus trees
There's a wagon, wheels

The man playing guitar is named John
He's waiting for the rest of his band
Relaxing, playing music, his face says “get me out of here”
He's playing country music, playing John Wayne
“Help” by the Beatles
He plays country, not classical!
Wearing boots to match his hat
He is sitting on an amplifier while it plays background music
The guitar case is open with a picture of the band playing
There's a guitar and accordion

The woman is in sandals
She has stripes around her shorts
Boy is wearing hightops and suspenders
He has something over his hands, an oversized shirt
His name is Tommy
The woman likes the music, but the boy says “yuck!”
They're going to eat after, just going to lunch
Lobster tails, ribs
Waiting for the bathroom
They go back home 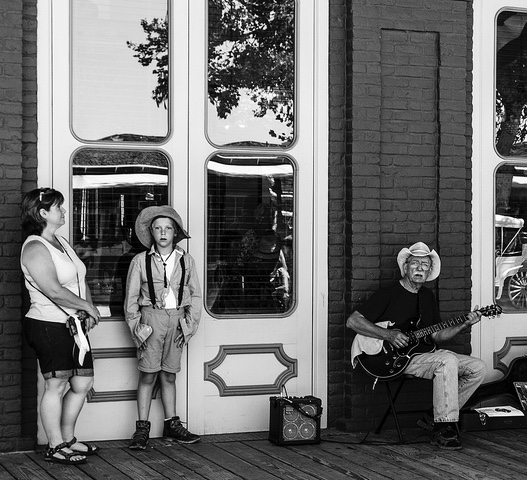