Nice legs! But no calves!
You can see 3 men and 10 legs. It´s on the stage of a theater or of a festival hall.
Who knows what´s going to happen behind the curtain ...
The legs are going to perform a dance. The legs are completely on the ground – so they don´t dance yet.

They also should have a left leg! Actually it is the right number of legs – only on one side they have different kind of shoes. The legs on the right side are smaller than the ones on the left. The calves are different – but they aren´t beautiful and nice, the calves.
One of them actually has nice legs! According to the feet, these are well off people.

You don´t see men´s shoes. No, men don´t take part here. But there are definitely a lot of men in the audience!
I was at the theater quite often – in former times. I think I was right there in the audience. In the front row.
Everybody likes an evening at the theater very much.
I like the curtain very much, too – I would love to have it at home – with all the garlands and fringes.

In the front we see little colorful balls. This is the electric lighting – and the light goes on and off.

The three men in the orchestra have handsome faces. One is all dressed up in the orchestra: nice hair, especially nice clothes. There is a guitar, a violin, a trumpet, a bass or a cello. They´re playing a waltz or a tango! Yeah, tango is good! Or the Radetzky marching music. Or maybe they dance like the Irish – then they need iron at their tap-dance shoes.

The curtain goes up! Everybody´s waiting, until it´s going up! Then you´ll see the people behind it. The music starts. Everybody in the audience stands up and claps enthusiastically and shouts: „Oooh!”

They start to dance ... with the legs? What else? With the belly! It´s called belly-dancing!
The chorus girls do what they want to do. No, they are not allowed to do that! Everything is prearranged and predefined. This is obligatory! Let´s hope, that they´ll do it right!
When the curtain falls, everything comes to an end – they applaud.
The legs hurt at the end. You have to rub on some ointment.
Some of them may say: „Next time I´ll have to put on different shoes!”

Anyway, I love my legs the most. 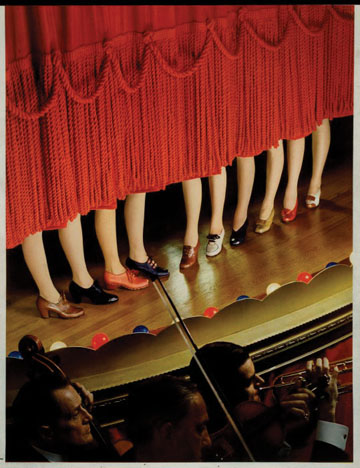