The Bird Man is Toby. Some of them are Rhode Island Red chickens. I don’t know any other kinds. Maybe the others are not chickens, just birds. There are two roosters. And some of them by his feet are baby chicks. Maybe the rooster and hen mated – in the past.

Toby is feeding them sunflower seeds. He’s going to get more chicken feed.

It looks like it’s 12 noon because of the lack of shadows. It must be warm because he’s wearing a straw hat. Or maybe people there just don’t go out without a hat!

Is that a shadow in the background? Is it another person or not? Maybe it’s a horse. It is a mural. It looks like a bear in the mural. Could it be a mama bear? Could be…

I hear Toby’s footsteps. He’s going to stumble and spill all the seeds. And the birds are going to have a picnic. They’ll find the feed. No one has to put it in one place for them.

It looks like he has a flashlight in his hand. I can’t explain the flashlight, and I lived on a farm for a while. Or, it is a smashed beer can. He drinks beer for lunch. That’s probably true.

You don’t think he’s trying to get the chickens drunk?! Did anybody ever see a drunk chicken?! 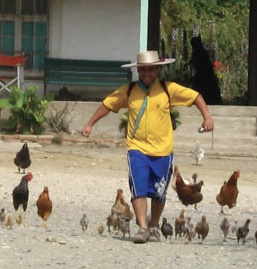