This is the story of the two suffragettes who are posing for a photo. The photo is intended to make a point that women can fence just as well as men. The female fencers are Penelope and Marigold. Penelope is the fencer with her back to us, and Marigold is front facing.

These two women have been friends since childhood where they grew up in the rural town of Albany. Together they moved to New York city and they have been inseparable ever since. Marigold, or Goldilox, as Penelope likes to call her, particularly enjoys melted butter on the freshly baked bread she picks up weekly from the corner bakery.

The women decided to pose for the photo after seeing how women were treated in their home town. Together they joined the suffragette movement, and Goldilox's husband, Franz, became their photographer. He is a part-time photographer who works to support himself and Goldilox. Since Franz is a German immigrant who moved to the states after the militarization of the Prussian state, he is sympathetic to the suffragette movement.

Penelope, or Penny, as Goldilox calls her, gets along with Franz. Penny is not married, but her boyfriend is a British solder fighting in the Boer War in South Africa.

The women hope their photo will help make change, but they are not sure if it will. 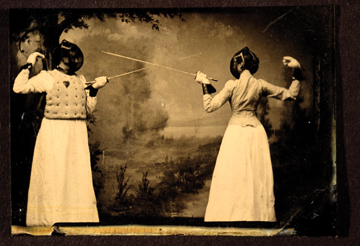