FOR THE LOVE OF CHICKENS (SAVING PRIVATE YELLER

It is a warm summer day in Amarillo, Texas on the farm. Eight year old Maran is gazing sadly at the sweet chickens which are imprisoned behind the wooden slats of the hen house. It is Maran's chore to care for the chickens, feed them and collect their eggs every day. They are her special pets, Maran loves these chickens! Maran considers herself a 'Chicken Whisperer', she knows with all of her heart that the chickens are clucking to be freed. Maran smells the chicken manure, she feels the crush of the chickens at the small openings in the slats. The chickens in front are Ol' Yeller, Brownie and she spies Robert behind them. "Cluck, cluck, cluckety, cluck, cluck, cluck" her friends are crying. Maran knows she is the only hope for her feathered friends, she makes a snap decision and grabs a hammer from the tool shed. Maran uses all of her strength to pry one of the wooden slats off. A wild frenzy of clucking and the crow of the rooster as the chickens scatter, feathers fly everywhere. Maran's mom and dad have been watching the entire time. Maran hears dad say to mom, "Well, I guess these birds will end up on the dinner table now-IF I can catch them!" "Oh no! What have I done?" Maran is thinking. She quickly begins calling to the chickens in their own language, "Cluckety, Cluck, Cluckety, Cluck, Cluck, Cluck!" Maran urges the chickens, rounding up the whole gang. Maran quickly nails the slat back up, tosses the hammer away, then turns around proudly to discover that she has nailed herself into the coop and the chickens outside of it! Maran has nothing but chicken feed to eat, and some chicken eggs and water. Maran peeks out of the holes in the chicken coop fence; 'So this is what it's like to be a chicken' she is thinking. Meanwhile her chicken pals have run for mom and dad, clucking wildly. Dad follows the crazy chickens and discovers his daughter trapped in the chicken coop, the hammer tossed on the other side of the fence. Dad says out loud, "You are some smart chickens! How did you get my daughter in there?" Maran doesn't say a word as dad releases her from the coop. She herds the chickens back inside quietly. Dad says, "Well, if they could do that to you, I had better be nicer to those chickens..." Maran decides it was all worth it, now her pet chickens have the respect they deserve. 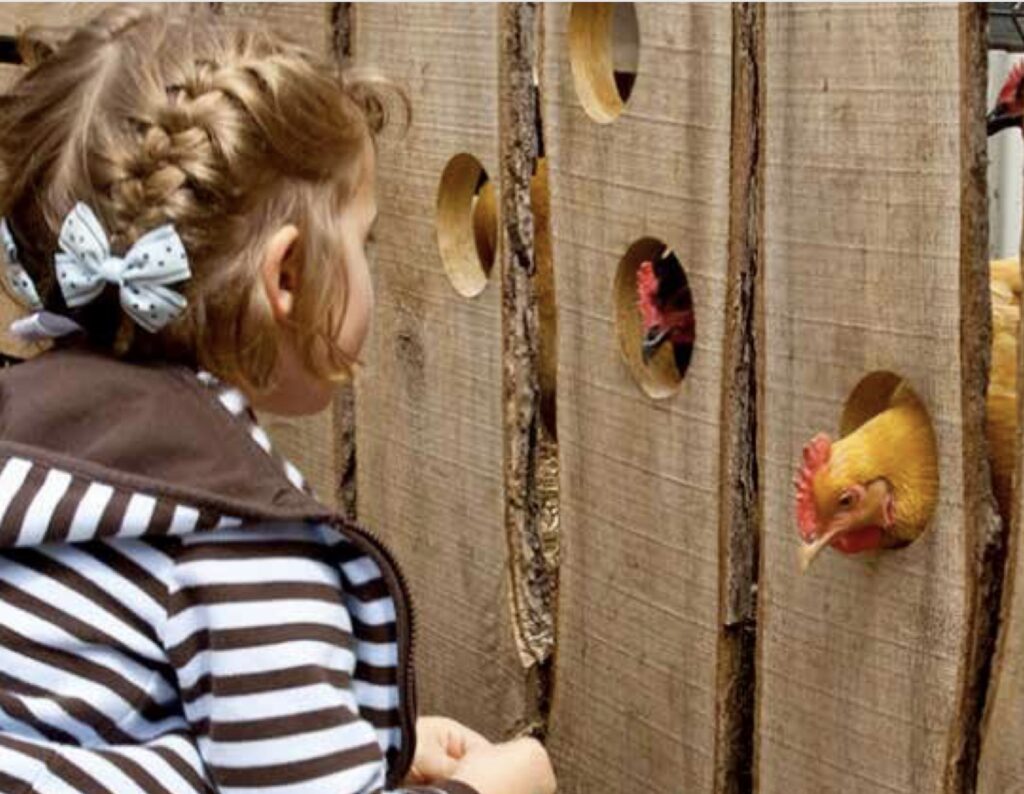