One snowy day in December, cousins and friends, Chelsea, Bobby, and Renee, were playing outside on the sunny sidewalk under a blue sky. School was out, but they had decided to conduct a little science experiment of their own. Their question was whether or not bubbles freeze! So on this wonderful weekend afternoon, they ventured outside in their heavy coats, bubbles in hand.

They blew bubbles all afternoon, mostly big ones, some even bigger than their heads! They were having quite the fun-filled time on that sunny day outside of the apartments, buildings, and houses in what might be Michigan or maybe even Fort Campbell. They could hear the sounds of cars honking, driving by, and snowplows plowing the road. Big band music played from inside one of the houses too.

It was pretty cold, but that didn’t stop them from having the best time together. After all, they weren’t in school! Frankly, it was lucky their parents went out there with them too because without supervision, there’s a chance they might be mischievous and try to toss rocks into the windows of the houses instead. But not today – today they just have fun with the bubbles, wondering if they’ll freeze over their heads. Bobby looks like an astronaut with the bubble surrounding his head and his big, puffy coat. And today’s his birthday! What a fun way to spend a birthday. There are mountains in the background and snow all around on this carefree day.

After they play outside, they go back inside for snacks of watermelon and hot chocolate, and maybe even some coffee for the grown-ups. What a fun, light, carefree day! 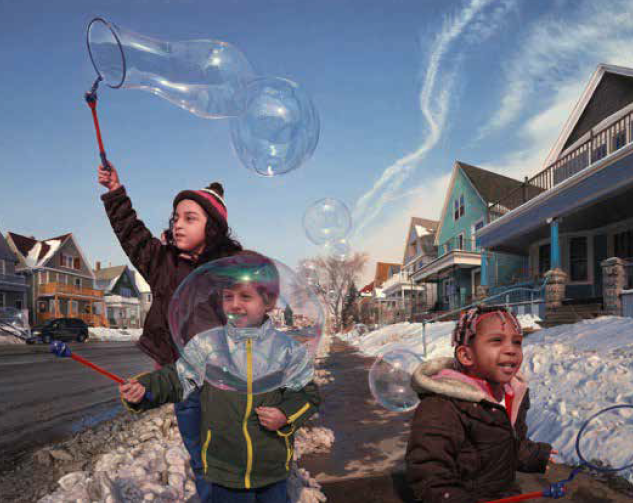