Garfield is the cats name. (Lois) Francis is the girls name and she is 12 and 14 years old. They are relaxed, content, silly and must lay like this daily. Babs says she is in her jammies. Paula believes she is autistic. The girl and cat have a special relationship as in many autistic relationships.

The big question is "who is copying who"? They have crazy paws. They wonder how long they will lie there. Francis has just eaten her a big breakfast. She had cereal, waffles, eggs and ham. The cat ate Fancy Feast for breakfast. Garfield's favorite food is fish.(Sue) She had a big meltdown and the cat helped to calm her down. She is wearing her zombie shirt. She doesn't have any siblings and she is homeschooled. The cat will soon nudge her as cats often do.

She also has a dog outside named Max. She lives in the city because she has carpet. You would not find carpet in the country. The city is in Utah in the mid West. Her parents picked a house with lots of room and furniture with rounded corners because she has melt downs.

Garfield sleeps with her. She has had the cat since she was a kitten. The cat is a girl and helps her so much when she is having a problem. She can share secrets with the cat. Whenever she is hurt she gets a snack and so does the cat. The cat likes tummy rubs. In the evening after supper she would hang with the cat. She likes to watch television and make puzzles (with pegs or wooden knobs). She likes big pink with purple polka dot puzzles best of all.

She can communicate with the cat and some people. Sue said she had a cat that disappeared for two years. She said when it returned it had pads on his feet that were worn off. She never did know what happened to that cat. Lois said there is a cat at their apartment building that likes to visit people's apartments. The cat would come visit for a while and then want to head home again. It was a play date.

Francis may be holding a cat toy in her hand. Animals are so sensitive to people. They may play with the toy later.

The social worker showed up because she had a fit but they saw her with the cat and said everything was fine. She goes to her room to look at a book and the cat goes with her. The cat lays on her book just like cats do. Everything is okay now. 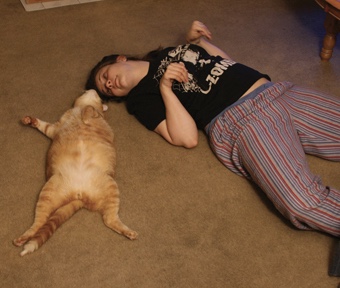