Girl At The Beach

This takes place in Coney island on a cloudy day, says Gloria. Not necessarily, says Ray. Norma says, it could be at any beach. The sand is there, Rockaways. Gloria responds, in the 1920's and Norma says, NO! Gloria says well it certainly wasn't later then that, look at her outfit, she was a young girl. Her outfit is something a woman would wear today, says Norma. Would or wouldn't? Yes, would, it's not my taste and it looks like the person behind her is barefoot. She must be on the sand at the beach. How can you see if she's barefoot? I don't see shoes on her. Gloria responds you don't see her feet? I'm talking about the person behind her, says Norma. That's a little kid, it's a boy with folded arms. No it isn't, says Ray. Marie responds, yes it is! Well it's not a little girl. It's my time to be on the beach. I'm almost older then everybody and I saw what they were wearing in my day when I was a kid, responded Gloria. I'm sorry I don't have my pictures.

Her name is MaryAnn. She's enjoying the heat, the daylight sun, a warm summer day at the beach at Coney island before the apartments went up. It's a sunny day because the personal behind MaryAnn has an umbrella. MaryAnn is wearing her bathing suit and it's from the 1920's, says Gloria. Norma and Ray say it's not a bathing suit, it's a dress, the bottom part is like a skirt not pants. Exactly! responds Marie. Marie says, I was never on a beach and saw 2 women wearing full dresses. Gloria says, when they were wearing this as a bathing suit I wasn't around yet. The family is young like MaryAnn and goes to school. MaryAnn has a son about 10. Her sons name is Eddy. Where did you get that name? I don't know. I think MaryAnn is older, maybe late 20's. That's what I say. Yes! I see people sitting behind her that may be her family. Maybe she can work, housework, she works in the home. MaryAnn is feeling the back of her head,she is relaxed and happy. She wants to take a nap, says Gloria. Norma responds no just enjoying herself. Kevin says MaryAnn is enjoying the warm sunshine. MaryAnn smells the fresh air, she hears the ocean waves and the breaking of the waves.

She goes for lunch and gets involved talking with some gentlemen, says Ray. She pulls her dress off and goes swimming, responds Marie. Ray and Norma say, MaryAnn does not go swimming but gets involved in conversation with the men. They go to eat a snack, it's about 3:00 in the afternoon and it's warm. Marie says, they are going to eat frankfurters and French fries. Norma doesn't think so, she thinks it's a casual meeting and MayAnn and the men go for coffee and pie because it's sort of in between lunch and dinner. Gloria says, it if were me I'd go for a frankfurter and a beer. They are near Nedicks and they will have their famous frankfurter with their French fries and then get a glass of beer. Gloria then corrects herself and says, I mean Nathan's. Nathans have been in business for many, many years. Myrtle says in those days they just eat.... Marie fills in the blank with hamburgers. Myrtle says, yes. Just go out to the store and get some fried things like fried dumplings you know you like. If they were at the beach in Coney Island they would have corn on the cob. Gloria adds, my grandfather had a stand in Luna Park, in Brooklyn, in Coney Island and all the rides the grandchildren would get free. After eating MaryAnn and the gentlemen go for a ride on the Merry-Go-Round. I can't picture MayAnn on a
Merry-Go-Round because it's usually parents and their children, says Gloria. Norma says, they will probably never see each other again.

MaryAnn is a fun loving, happy go lucky person who enjoys the outdoor and enjoys a day at the beach. UM HUH! 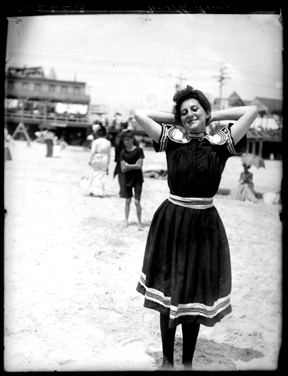