Going for a Hike

This is a story about a teenager named Michael who decided to for a hike. The hike took place last week--after Michael got home from school. The boy told his father that he wouldn't be gone long and when he turned around, Ranger was following him along the trail.

They walked for quite a while, noticing the beautiful day. It was hot, but not sweaty hot. And there were lots of birds flitting about in the tall grass as they walked along.

Michael lived in Wolfville, a little town in Nova Scotia. There are lots of good hiking trails around the edge of the town and you can follow them for miles and miles. Michael's favourite trail is a big loop that goes right around the town of Wolfville, beginning and ending right near his house.

Michael hadn't gone very far when he thought the sky looked kind of dark in the distance. He was worried about a thunderstorm approaching, so he turned around. He whistled to Ranger and he came running over to Michael, wagging his tail. Michael could smell rain in the distance and t

"Come on, boy," said Michael. "Guess we won't be able to hike the whole loop today. It's going to rain."

So Michael and his dog, Ranger, turned around and went back home. When he got back home, his father was very pleased to see him and told him he had made a good decision.

"Better to be safe and dry, Son," said Michael's father. And the next day, it was sunny, so Michael and Ranger went for a wonderful hike! 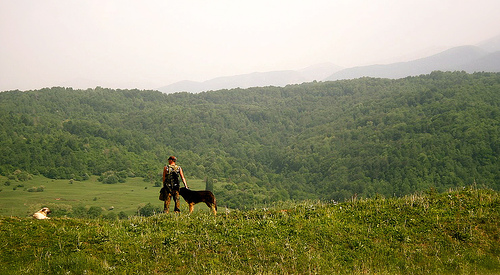