An Oriental having a ball! He has a sucker in his mouth. This takes place in a garage dealership. Looks like a brown colored tool, like a kickball. Those are cannon balls. You have to keep them thinking. Ten cannon balls are there. It takes place right away, like now, in ten minutes.

They got to be chocolate balls because he already bit into one. Cannon balls. He’s taking them somewhere to be fired. He better damn well put down that cigarette! He’s headed to a storage container for food. He’s putting a plan together for how he is going to use the food. When he gets to the storage unit he’s going to figure out a plan to scare Nick!

If its chocolate he’s going to catch them! He’s in college. I don’t want to say it this way but he is like the rest of the guys his age. He is fun loving but just wants to drink beer and party. These could be lawn balls (Bocce) but they are the wrong color.

This guy is about 23. He is working on getting himself established. His dad is Nick. The younger ones that get to do these things really make a difference. Charlie is his Uncle.

This guy would discover that he made a mistake because cannon balls are falling down and he’s bending over backwards. I would hear sounds of those things dropping. He’s having a hard time balancing them. He’s cunning. He’s overworked. He’s probably thinking, “Oh man, what am I doing this for?” The cannon balls ricochet off the walls. The balls fall out of his arms and he loses them. Something is going to happen to push them down. 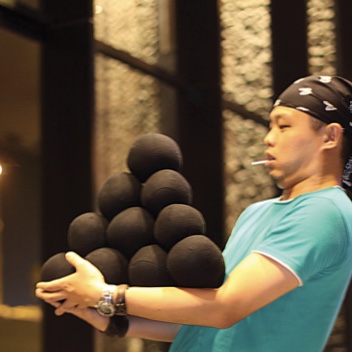