Mmmmmm. Look, him has a rabbit! They’re the same, maybe brothers. He’s a man. I see a man. His name is Annandale and he has a bunny. He’s got some money. He’s touching it and he’s putting it into the rabbit.

Val thinks the rabbit doesn’t belong to him and that it’s Sue’s rabbit. He was saying a prayer as he put the money in: “Dear Lord, can you please help me to become …”

The rabbit looks like he’s ready to take off. There’s another time thing—a watch. It’s a gold watch. He is fitting the money in. Of course, he has a family and he’s paying them with the money! He has a bigger family at Nick’s home in Sydney. He wants to give the money to his mother. Val thinks he might be using his mother.

The rabbit has a hole in his back. The man is very happy. He’s going hand by hand to the church, prayer first, then Maria’s mother does the Charleston with her dad, and then sings a song. OPA!!!

After that, he’s happy because he’s having two drops of beer. He is greedy!

Come, Rabbit.
Come with me,
Happy as could be!

Annandale is feeding the bunny with money and food. The bunny is called “Bunny”! He’s putting a heap of money into the back of the bunny. He’s going to spend the money on himself … because he’s greedy. He’s fat! Maria P. thinks he’s going to spend it on the animal.

He’s going round-about with the bunny out to the paddock. Could well be that they’ll meet again. There’s a bag on a picnic rug. They’ll spread the rug and go on a picnic. They will go around the big garden and they will eat the fresh lettuce!

This story was created by Val, Maria B., Maria P., Margaret C., Nicholas and Giuseppe at Mary Potter House, Calvary Hospital, on 10 November 2014. 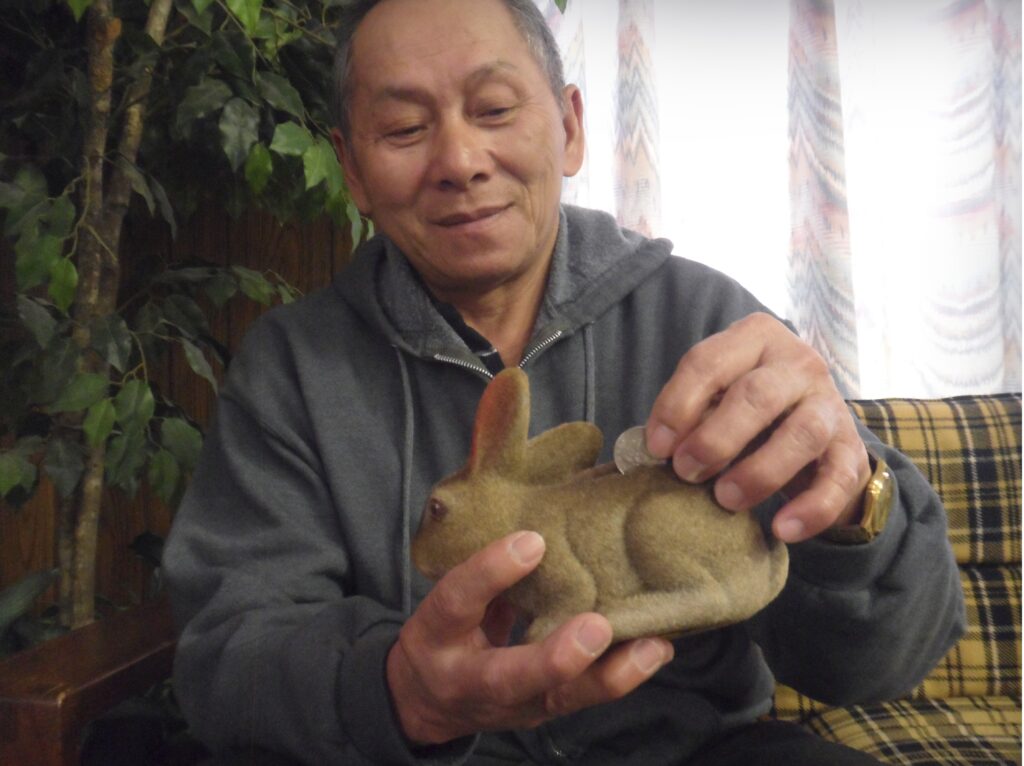