Storytellers from Newark Extended Care in New Jersey Facilitated by Lillian Ribeiro
Session 1
This is a 50’s Ford or a 40’s Ford a 57’ or a 56’. This belongs to a farmer or this 56’ Ford belongs to an insurance sales man who sells life insurance, specifically to families.

His wife Sally is a stay at home mom. They are in Ohio. They are driving to get more customers. Make more sales. Sally is doing errands for the family. She’s washing dishes cleaning the house, and taking the kids to school. Sally’s tired. She’s got too many tasks at one time. She has to reschedule her time. Herbert or James Williams is still in the car. Sally’s dropping him off for his commute at the train station, Knickerbocker-Peapack Train Station. He’s going to brand new places; to places he’s never dreamed of. Places he’s never been to. He likes to commute. He also feels confused cause he doesn’t get the right train to the office. He feels in limbo. He wants to go to the Westington House in downtown Penn station at Broad and Summit.

He’s the regional manager there and selling life insurance to the employees there and outside. He wants to go on a different train. There are premium packages; life insurance is good. It helps the people dying to die in peace without worrying about how they will be buried. He tells the family (specifically that man of the house or just the head of the household), “Dear Ms. Sarah Williams the life insurance for your husband is $50,000. Mr. James Williams says how much they have to pay and for how long. “The premiums are low. The benefits will be high. And you can afford to pay a premium.” Before he starts he finds out their name, how they are doing and how many children they have. He does a demonstration and offers an incentive for the families to want to buy it. He offers a free turkey around the holidays once a year and he makes the sale. He says, “Thank you very much. Now sign this.” The salesman says, “Your policy will be coming in the mail in 3 to 4 weeks. Now give me your money, your installments, which will be a payment plan three times a year, every four times a year. Every four months.” He says, “It’s been a pleasure doing business with you. And I will make sure your turkey arrives before Christmas.” He says to Mrs. Williams from the Westington House, “Thank you very much and have a good holiday.”

He lets the office know he made a sale so they can get the paperwork done and they won’t be surprised when the checks come in. He calls his wife and tells her he made a sale. She’s delighted she laughs. She’s happy and goes out and spends it. She gets extra groceries, and extra gifts; things that they need. He comes home and says, “Honey, what’s for dinner?” She says, “I made a very special dinner and there’s a big spread on the table.” The husband thinks, “What have I gotten myself into.” He says, Wonderful, but you went overboard. So she says “Save me. I was only doing it for the family.” He says, “I made a sale today and that was a good thing. Everyone has fun and enjoys dinner.
THE END. 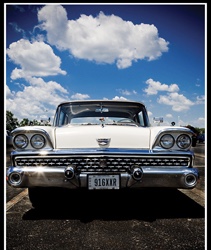