She doesn’t know what she wants. She’s confused. Looks like she dropped her luggage She must have dropped her luggage, because her handbag is opened. She’s looking for something; I don’t know what. Looking for something she needs at this moment. A handkerchief. Her children. She might be looking for a key. A sandwich. Her boyfriend’s telephone number. The credit card in her billfold. She’s checking her bag to make sure she packed everything. If she didn’t pack everything, what would she do? She will do without. She has to do without.

She’s at some transportation place checking her bag. She’s at the airport. She feels she hasn’t put in the right assortment of cosmetics and wonders if she will look her best with this cosmetic supply. She’s at the railroad station. She’s going to New York. Yes, she’s going to New York. She doesn’t know if she needs to go back to her apartment to get the special items she needs to take. She needs to hurry so she doesn’t miss the plane.

Is that a sidewalk? Why is she in the road? Yes, why is she in the middle of the road? There’s a place back there where people are standing. I would get out of the middle of the road and go where the other people are. The latch of her suitcase is broken. The only way she can get her stuff in the suitcase and get back there is putting it in her big arms.

She’s going to Chicago. Her kit of items she’s taking with her, she’s getting things out. She might not be where she wants to be. She’s running away. A lady running away from her boyfriend. I wouldn’t like to say anything to her; she’s not that interesting. She’s packed to go to Europe. She needs more than that to pack to go to Europe. It’s a messy job of packing; she’s done it in a hurry. She’s going to meet somebody from Europe. She’s going to see her mother-in-law and wants to look her best. She put a good shirtwaist dress in the suitcase. She could do a lot of things. She’s going to school and has to pack her things to get on the train to get to school. She might be going to visit family, or going to school, or to see other places that are far away. She’s on vacation. She’s going to a wedding of her friend. She’s taking a dress. There’s not much room in there. She’s visiting her family on an island. Manhattan is an island. Yes, I never thought of it that way. She’s going to a small city, or to a larger city. She’s going someplace where she will need more medication.

She’s not very wise. I would do my job, get out of the road, go to the side. Just close it, get out, don’t try to fix it. She’s checking her bags to see if she forgot something. If she did, she can buy something at the airport. She’s searching for things she’s forgotten. In the middle of the road? She has textbooks in her bag. Maybe she forgot one of her important text books. Why doesn’t she go to the side to look for it? She left pictures of her family she wants them to see. She left her family behind. She’s looking for her eyeglasses. She has a book. She may be going on a bus, not a train. She has the book so she can read on the way to her destination. She has a bottle of whiskey. That’s a good idea! I forgot about that!

Whatever she’s looking for, she’s going to get it and go the hell where she want to go! 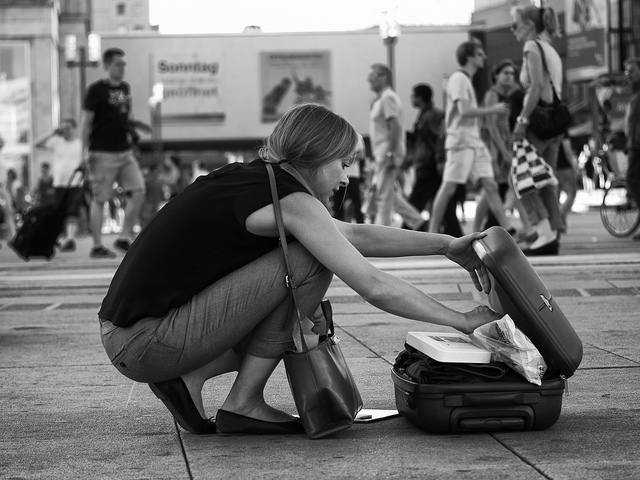