It doesn’t seem complicated at all. His name is Jolly John Blackjack and he’s on a big boat. That’s a little lantern on the front of the boat, for when it sails at night time. It could be a freighter. Or maybe it’s just a business that conveys people – a cruise ship.

If he were working for Disneyland or some other company like that, it would explain everything. Jolly John always has something to do. He’s a performer in some kind of theatre production on the ship.

(They’re weirdo people! Doesn’t sound like anybody I know!)

Yet, somebody’s being driven off the track. His hands are being held back and are tied behind him. It’s pretty well-established that this is what’s going on. And he has a cloth around his head, too. Maybe it’s a blindfold! Or it could just be a hat.

He got tied up because he did something that he shouldn’t have and someone saw it. He was spying on his masters, but he got caught. Maybe his feet are tied, as well. You can see the rope going down to where his feet are. Either they’re both tied, or maybe just one of his feet. He’s keeping track of things, for sure.

Next, someone’s going to get rough with him. Why is he standing up here, if they’re not going to knock him off the boat? Jolly John is thinking “What the hell am I doing here? And how can I get away?” 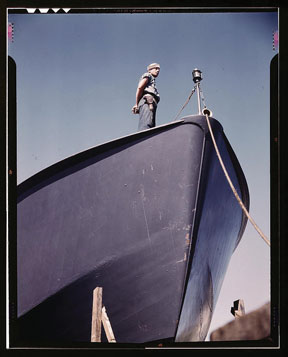