He’s Delivering Christmas Packages, It’s not the 4th of July

The mailman delivering a package. It's got a package here and mail here. I don't know what he will do. Look at that snow! The house across the street doesn't look like the front, looks like the back. It has to be winter with the snow. We haven't got much snow lately.

I think it's around January. I think its around December, mhm! It's your turn. The packages are for the whole streets. I think he is ready for Christmas. I think he will be glad when Christmas is over! The house has a basement and a fireplace. That's a Christmas wreath with the red ribbon. In his hand he has a box of lights and Christmas candy! He's happy, these presents goes here apparently. I don't know if it does. He's got a big mail bag. That's the back of that house, so does that make this the back on this house? Maybe there are more houses. I see the back of his postman car, so makes sense. Looks like farm country, could be any place that gets snow. It looks like its falling that way. That's one heavy mail bag. He's smiling even though he has so many packages, i see extra room there.

His name is Smiley. Postman, mailman. Jim! Butch! Doesn't make any difference, it's heavy. They all weigh different, some and letters. The brick house faces the same way as that one does. It's a hilly area, its really weird. Yeah. That's the back way here. Usually on the back is a back door, but this doesn't have it. It's definitely country. Do you like the snow? It's nice to look at. As long as you don't have to shovel! I think his cap is a little too big for him, his ears are buckled forward. We don't get as much snow. Does it stay in Alaska? What are these? Plows? Looks too straight up or down for tree? Skinny trees, lost all their leaves. Not an oak tree (laughs) that's for sure.

That could be in front of this on that side. That must be the living room, the fireplace is on that side. We had a chimney in the house once, i remember them to go. Hasnt been any animals there's no tracks in the snow. That cant be a garage, it wasnt shoveled and you cant see the driveway. 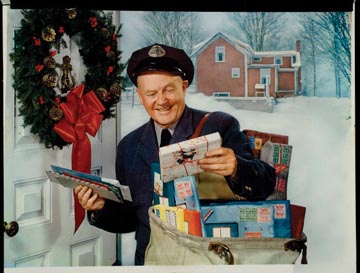