They are two teenagers. Hansel and Gretel. No, Agnes and Muriel. Does she have…? They look like sisters. I think they get along. Gosh, I don’t know. It looks like they’re wearing a couple of… I’ve never seen anything that ugly! I agree!

They butcher chickens and save all the feathers. And torture people named Charlie that fall asleep during storytelling (laughter). These women are from the East coast. I could tell by the way they dress. It’s probably around the 1900’s. It could be earlier than that at the turn of the century like the late 1800’s. They’re from Russia. They live in Canada, Ottawa, Canada to be exact.

No family just the two sisters. The family got away. That one is a good one (woman on right)and the woman on the left is cuckoo. The woman on the right looks mad. She has a little bit of a pinched face and it goes good with the feathers. They are some sort of instructors. But I don’t want to give anything away. I think a lot more. That looks like a radar antenna on top of her head.

I think they are going to be offered top modeling jobs. The woman on the left has the ability to touch higher cloth. And the woman on the right has that cloth. What do you see in these women’s faces? They look like they’re left out of everything. The look on their faces, “Oh, God, we’re left out again!” They are getting ready to board a ship. Hopefully it’s not the Titanic!

Created by male storytellers at a VA Dementia Care Community. 8 May, 2017. 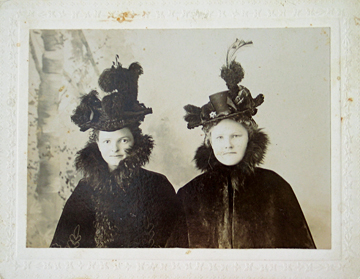