Is He Up or Down?

At first glance, our residents cannot decide whether this man is going up or down the pole. He seems off balance and anxious to them, as if he’s trying to figure out how he’s going to get down or worried that he is going to fall. There is snow on the ground and one resident thinks that he might be trying to avoid touching the snow, adding that she doesn’t think he likes to be in the cold.

“Joe” is Bea’s immediate response and the group give a nod of consensus.

“Are there any other people in the picture?” I ask.

“Do you see anything in the snow?”

“Well, with so many footsteps, why don’t we see any people watching Joe WishIhadn’tdoneit?”

“They all stepped back because it seems like he’s just goofing off…just seeing if he could climb the lightpole.”

To ascertain where this might be located, I point out that the building behind the man is made of granite and I ask what types of buildings are made of this type of stone.

“Banks,” says Bea, and then names the locale as First National Bank of Omaha, an appropriately snowy place for our picture she assures.

The residents feel that this is taking place in the morning and when prompted, imagine that the air smells fresh and clean. I follow up by agreeing that the snow can sometimes have a purifying effect on the environment. Barbara feels that the morning is silent and cannot even imagine his sneakers squeaking on the way up (or down) the pole but another resident imagines that the silence might be broken with the man calling “Help!”

Eileen is incredibly concerned that the top of the lamppost is askew. If he actually makes it to the top, she is afraid that the glass is going to come “crashing down” or that he might get hit with it. Barbara suggests that an airplane flew over and “bumped into it.”

Chris, the only person who interprets the look on his face as a smile, suggests that maybe the man is climbing up the pole to fix the light. But the group doesn’t think he’s going to be able to fix it, in part because Bob B. points out that he doesn’t have any tools on his belt.

After an unusually lengthy and quiet study of the photograph, Bob B. contributes, “I think he’s a daredevil and someone dared him to do it.”

“Has anyone ever been dared by a friend to do something?” I ask.

Lynn responds “yes” and when asked who dared her, indicates that it was her husband.

I reflect on a story about how my brother dared me to jump off a ramp with my bike when I was a little kid. Other residents are sure that they were dared as youngers or that their sons dared each other but cannot recall a specific incident of a dare.

We conclude by observing the rubber gloves on the man’s hands, the kind used for washing dishes, and Chris observes that this type of glove might give him a better grip on the pole. Other residents think he has socks on his hands and I add that socks are sometimes used when you can’t find your gloves! We wonder if this man might be in college but someone observes that this is not a super smart thing for someone in college to do.

What will the man do afterward? Run into that building as fast as he can! 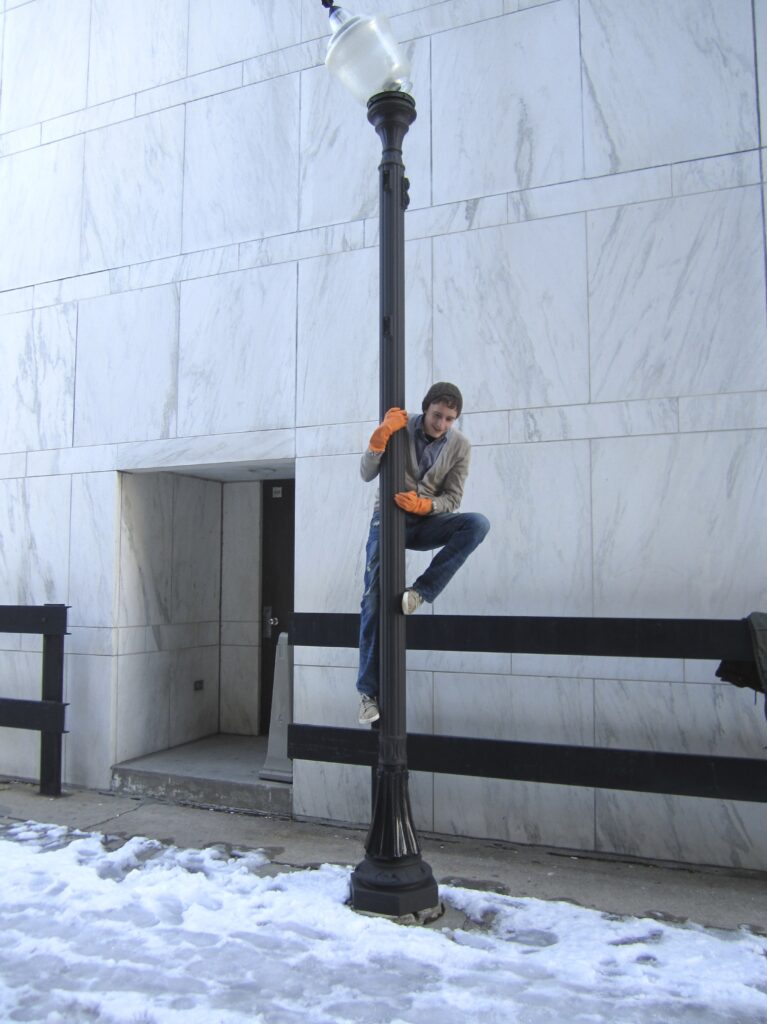