Everyone thinks they are at the beach.
They are having a race and having fun.
Carol said that the people and animal are close.
Thelma was noticing the sky was very blue, with clouds.
Fran said that you can tell that they were swimming.
How can you tell they were swimming?
Well, they got all their stuff on and they are coming out for a rest, said Carol.
Millie said that they have stuff on their bodies, and they have beautiful bodies. Why mess them up?
The beach is in a warm place, maybe Hawaii thought Ruth.
John said, “That it kinda looked like Cedar Point, and they are getting ready to watch a concert. They are late.”
Thelma says, “It’s a sunny day and they look HOT!”
Do you want to give these people names?
Nora says their names are Mr. and Mrs. Nothing.
Carol thought their names could be Barbara and Dan.
They are at the beach, you have said it’s hot. What do you suppose it smells like?
Ruby said, “They are out in the open, so it should not smell bad.”
Millie said, “That it is a nice open picture.”
What do you think the people in the background are saying?
Fran said, “They are looking to where they are going next.”
“They are spoiling the view,” said John.
Carol observed that in California that people on beaches do not look at everybody, and they are trying to find a place to lie down.
Ruth stated that the water was warm, and it looks like they are having fun.
Their swimsuits are appropriate, says Carol.
Millie thought the color of the swimsuits are nice.
“The pink bathing cap is hiding his long hair and stop it from getting in his face” said Ruth.
It’s a Beautiful Day

John said, “Somebody told him that he looked pretty in pink.”
“The swimsuits are blue, like when you go into the water” said Carol.
Thelma said, “The pink cap looks very good on him.”
Ruth says, “they are feeling happy because they are getting out of the water.”
“It’s a good day and they are just enjoying themselves,” said Millie.
Carol said, “You should always have something on your ankle with your name so when you drown, they will know who you are. 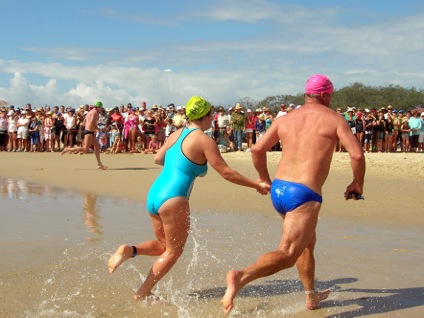