Junior had had enough. Enough rules, enough having to eat broccoli, enough sharing with his big sister and enough of being Junior! Junior decided last week that he would run away. His dad had taken Junior and his sister, Rose to a wonderful place by the waterfront. It was the best park ever; there were swings and musicians that played country western music and so many good things to eat. Dad had bought cotton candy and corn dogs and ice-cream cones that were in a swirly shape with chocolate and vanilla swirled together. Junior thought this was the best day ever when he saw dad take presents out of the car. Then, dad gave the presents to Rosie! Rosie got all of the presents, so Junior felt left out, especially when dad told him to "Buck up and be a BIG BOY," Junior was a big boy, he was two and a half years old and he could prove it by holding up two big fingers on one hand and the pinky on the other.
Junior began planning his great escape as soon as they got home. Junior got Mom's big blue suitcase from the hall closet and packed all of the items he knew he would need. Junior packed clean socks, extra pull-ups, a peanut butter & jelly sandwich and half a bag of Oreo cookies from the pantry. he also packed a bottle of soap bubbles (to send out bubble signals if needed) AND his cap gun (in case of trouble).
Junior started out Saturday morning, dragging the big, blue suitcase full of essentials, he headed toward THE WATERFRONT. Junior remembered it was a quick drive so he was certain he could walk there in no time. After about half a block, Junior was getting tired. Lucky for Junior that their mailman, Bill saw him and listened to his plans. Bill asked if Junior could use a lift to the WATERFRONT PARK. Junior agreed because the walking part of running away was more tiresome than he had expected. After making a quick call on his cell phone (to the head of The Post Office to be sure it was allowed, Bill told Junior) he offered Junior a lift.
This was another part of his journey, riding in the mail truck with its open doorway for Bill to hop in and out of. After only deliveries for another block and a half they were at THE WATERFRONT PARK. Junior pulled his suitcase past the people enjoying lunch, the musicians and noticed that big people had a way of not seeing him! he got bumped and jostled and three people tripped over him or the suitcase and said not nice things. Junior was beginning to think running away might NOT be the best choice. He was worried that he might cry if another bigger person said "Move it, kid!" to him. Just then a lady bent down to him.
"Are you lost?" she inquired. The lady was wearing a uniform like some of the park vendors. She was holding a big bunch of balloons.
"No, I am a big boy and I am running away," Junior explained.
"My name if Zola, what's your name?" the lady said kindly.
"Junior," replied our hero.
"Junior what?" was the next question. The lady just sounded inquiring. "My whole name is Zola Navarro; do you have a whole name?"
"I'm just Junior,"
"My brother is Raymond Navarro Junior because our dad id also Raymond Navarro. Is YOUR dad an also name?"
Junior thought about this. "I think my dad's name is DAD, so maybe I am Dad Junior,"
Just then Junior heard a familiar voice, "You are Gerald Hampton Junior, and I think we shall start calling you Jerry, instead of Junior,"
Junior looked unto his dad's face. He was so glad to see him!
"Am I in trouble?" asked Junior.
"Not this time, thanks to our friend Bill, the mailman who phoned to let us know of your plans,"
Junior thought about this, "I didn't know you were the head of the post office, I thought you were just Dad,"
"Well, that mamakes us even, I thought YOU were just a kid, I had no idea I had an explorer for a son, how about a corn dog and we head home?"
"How about a balloon for your explorer?" asked Zola, handing Junior a blue balloon, "It matches your suitcase," she commented.
"Thank you, Zola Navarro," smiled Junior, "I won't be seeing you again unless I'm with my dad AND sister, Rosie,"
"Great plan!" said Zola and Dad together. A 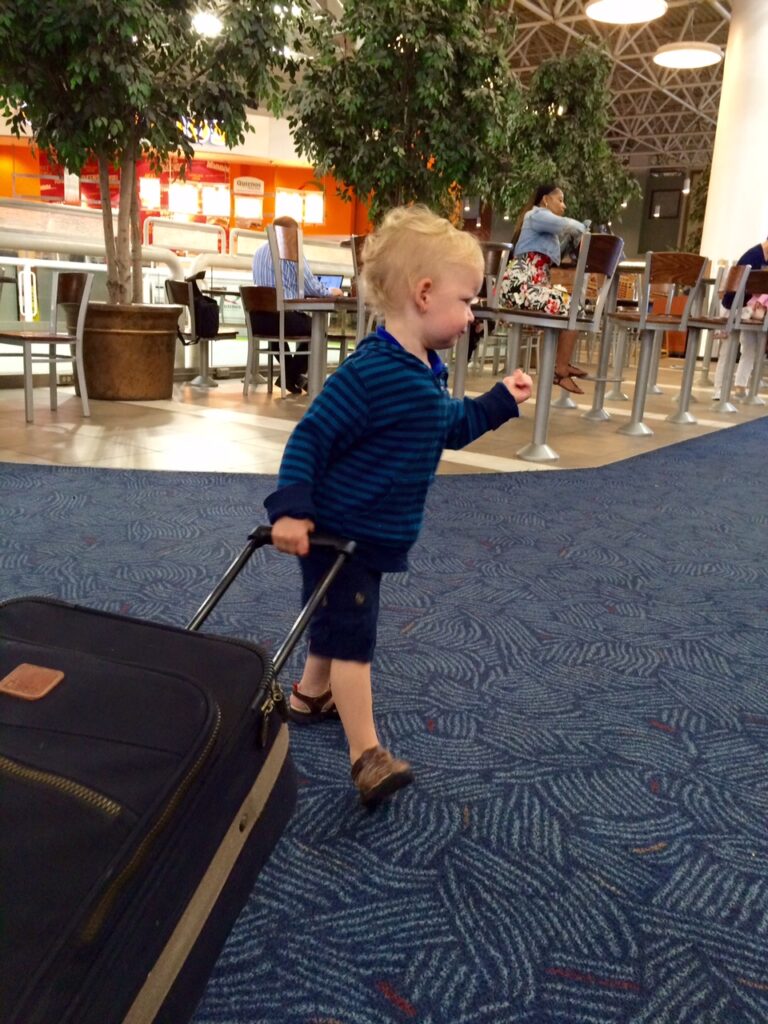