Magic Will Blow Your Mind

His dad died. There is a woman who is about to get her head cut off and another lady is watching. There are two women closed up in a box. Mothballs.

This guy has his head stuck in the table and the other guy is over him with a rain coat. Looks like she's fixin' to get hanged.

The little boy is watching to see what they're doing. The man is trying to bite her head off! The lady looks like something is scaring her.

Someone is going to strangle somebody. Choked by the neck! It's like there is a rope around his neck.

This is in Las Vegas. It's not funny. Something bad is about to happen. But it's just an act going on. If it was the real thing, you would see more than this. The actors know each other. They're bodies are really there. They are just covered up.

They are scared to death. The man is asking the lady for a kiss. She said no. The girl says, "Why, why, why are you doing this?!" "Cause I'm crazy!" She gives him a kiss.

Two people are looking looking at one another. You didn't see the other part. You just imagined it. Bodies are under the table.

He ended up getting his kiss. They're going on a date to a Halloween masquerade party. We will all go to the party.

Dorothy will be a witch so ugly that we won't know who she is, or she will be a mouse in the corner making noise that no one will know where it's coming from. Joyce will be Dracula. Mr. Keys will be Top Gun. Sheila will be a cat lady with a whip. Mark is Batman. Elli is a dancer. June is a bumble bee. Pam is a butterfly. Tre is Betty Boop. Karen will be a wicked witch. Paul is a boxer.

It ends when the lady gets her head cut off. The man has a pen in his hand and he's talking to the kid whose head is in the table.

But how will we get home? By magic of course. 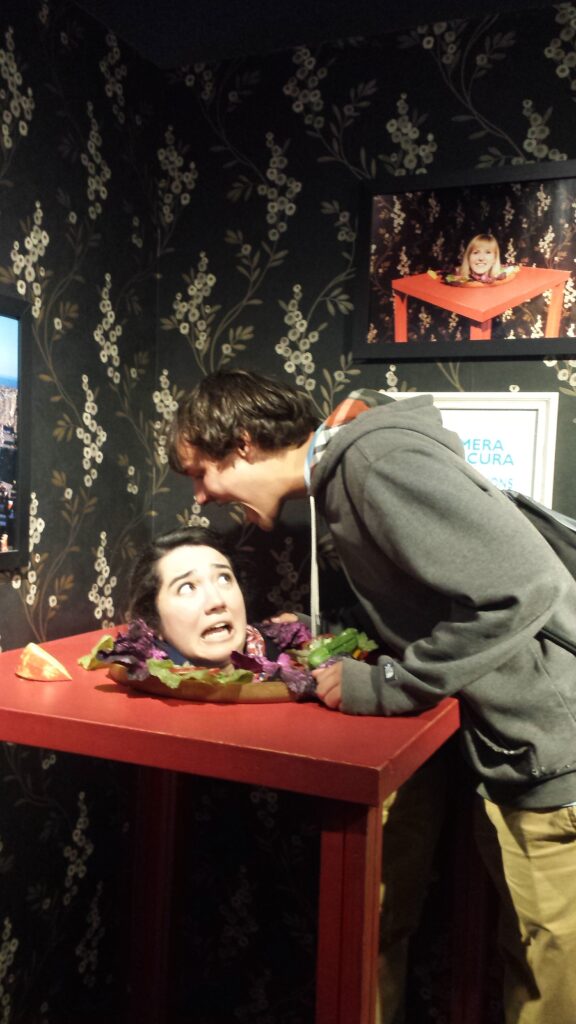