Momma lives in Alaska and her name is Carol. The Polar Bear is in the house on the couch. It is Spring out. Little Danny found the Polar Bear during the winter as a brand new baby cub and brought it in, Momma is keeping it as a pet. Now Momma is playing wtih it on the couch after a long winter of hibernationing. This cub is a boy. His name is Cubby the Fuzzy little Bear.

Danny found Cubby by the garbage. He thinks it was seperated from it's Mother when they were searching for food in the village.
Cubby is kept in a pen outside and is fed with a baby bottle with milk. And Dog food.

Danny wants to give Cubby some water to swim in. Danny wants to buy a kids pool at a local department store. Summer is coming. He also wants to get a dog cage to keep him in.

Danny will pay for these things while earning money shoveling snow and delivering the paper.

During the day we treat Cubby like a dog. We play with him, tickle him, teach him fetch, how to roll over. Momma likes to cuddle with Cubby while watching t.v.

Cubby needs to have his fur brushed everyday because it is springtime and we don't want him to get too warm and we brush the extra fur off of him.

Cubby likes to go out in the cold. We have a dog leash so we can take him out for a walk. People like to stop and talk to Danny when they are out walking. Cubby goes to the firehydrants just like a dog would. Danny has a hard time keeping up with him, he goes so fast.

Momma's family is from Waukesha and they will get free passes to visit Cubby anytime they want. 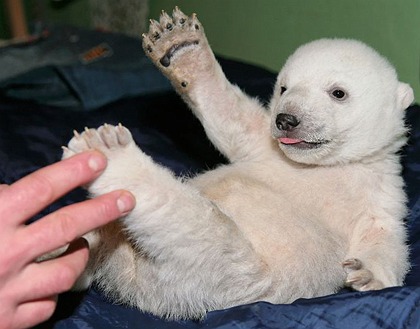