Monkey See ~ Monkey Do:
The Adventures of a Crazy Woman’s Monkey Business
Or
Would You Like to go for a Ride?
Been there~ Done that… More than Once

Her name is Betty Mae Amelia. I’m not sure how she’s feeling because she’s saying goodbye to her boyfriend. She’s on an airplane going on an adventure. She’s not going somewhere north. She’s wearing gloves and a hat and scarf. She’s going to South Africa or she’s going to Australia to join a circus troop named Priscilla Queen of the Desert. She’s in a circus flying an airplane. She looks happy in this picture taken in the 1930s or 1940s.

Her plane is painted like camouflage for a movie. The movie will be about escapism. It’s very interesting. ( I’ve never been to a movie...not like that!) Bette Mae Amelia has big eyebrows and is wearing make~up. George Clooney has big eyebrows too.

The plane is used for advertising. It will advertise by going around and around skywriting. A director is going with her to make a movie. The cast and crew for the movie are going too. She has a little boy and he might be going with her.

Betty Mae Amelia is happy as heck! She left her old boyfriend and has found a new one. She is smiling on the airplane. She is collecting her dreams and flying off to New Zealand. She’s a cultural anthropologist and is writing a report about the cultural interactions between humans and monkeys. She wants to know how the Maoris are being treated.

Betty Mae Amelia might not be on a plane at all. The window is small and so are the supports. She’s sitting on a merry go round.
Yep, it’s a plane.
She’s definitely on an airplane and she looks happy. 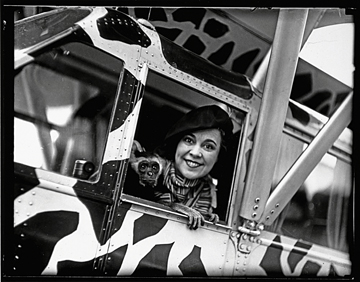