Three ladies with the Chinese dresses. They’re looking at each other, or at music … like they want to dance. The last lady is turning away—she is looking at something. The one is white is named Dimitria. She is Maria B.’s mother.

They’re waiting for people to come and start the dance. The two women are talking together. The lady in black is called Shane, and the lady in pink is called Stinker! It could be the name to come back in!

Charleston music was playing. The ladies are not necessarily related. They have three different kimonos and they want to swap places because they couldn’t sit there all afternoon.

The two talking to each other may know each other. But Stinker is sitting looking away and the others are ignoring her. We wonder what the box on the table is for. We can’t read the writing. It might be a computer … they might be just keeping up to date with things.

It’s a complicated story. We can’t see if anybody else is around and we’re not sure what is in the background. Stinker might be feeling angry.

They’re sitting under an awning. The ladies are in Japan—they wouldn’t be wearing those dresses in Australia. We could hear the sound of people talking to each other. They must have something to eat and drink. Apparently they might do it this way.

Dimitria was very strong and beautiful and she was waiting for the others to say something. They’ll have too much vino to drink, they’ll get drunk and dance the Charleston. Stan says: “That’s a good idea. I could do with a beer myself”!

Elsie thinks they might not dance the Charleston because it’s taking place in Japan. They may do an ordinary dance, and they might not be allowed to drink because they are strict in Japan.

After the dance, the ladies will go home to their families. 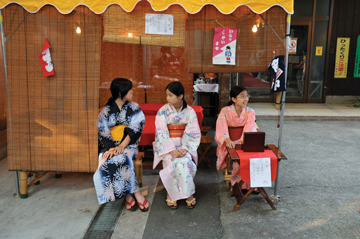