He's at home; sick or recovering. He didn't get to go to school. He needs to rest because he has mono or something serious.

His parents are in the house with him. He has fluffy pillows and a nice room. There are pictures on the wall-could be a dog or an animal. There is a nice bedspread with a little scene on it.

Why doesn't he want to be there??

It looks like there is a Doctors bag on the bed.
The Doctor is making a house call
It's 50 years ago or more
The boy doesn't look happy.

She is looking forward to getting well. She wants to be out bouncing around playing. Her mother or somebody stuck her in bed and said, "Let someone else look at you"

Probably she was suddenly ill in the morning and threw up. She said, "I don't feel well. Blaaaaaah!"
I guess you can't go to school today.

He likes toys. He likes milk. He has pillows fixed the way he likes.

The room is dimly lit. It means it's a sick room.

There's something going around and his mother thinks he has it but he doesn't. When I was a kid, it was Polio.

If he had the mumps, he'd have a bandana around his head. Whenever my brother had anything, my Mom made sure I was close so I would get it. 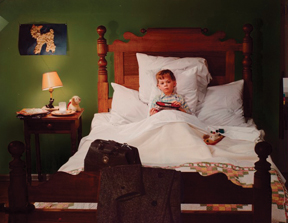