Orange shirt that saved his live

Once upon a time, there was a young name Arin who loved the sea. His family were land lovers who hated the ocean, but because of a recent inheritance, they were forced to live by the sea. Arin's secret dream was coming true. He imagined the feel of the water on his skin and the weightlessness of floating.

His parents forbade him from going to the ocean. They watched him constantly for fear of his disobedience. So at night, he would quietly sneak down to the pier, hesitantly dipping his feet into the water but longing for more. His heart would race and his parent's warnings would flash in his mind prompting him to run back home before they found out.

One night as he was on his nightly jaunt out to the ocean Arin notices a glimmer in the distance. The moonlight reflecting from an object sparked his curiosity and draws him further away from his house than ever before.

As he approached the object he was pleasantly surprised to see that it was a surfboard. Seemingly abandoned and there for his taking, Arin looked around tentatively making sure no one was around. He knew what this could mean for him, his chance to go out into the ocean.

He quickly grabbed the surfboard, dragging it behind him to a cavern he had previously discovered (also convenient) and then ran home quickly.

He couldn't sleep the rest of the night, restless, imagining himself soaring through the waves. The next morning, his parents could tell there was something different about him, but they could not investigate his oddly happy demeanor as they were leaving to catch a plane Tokyo. It was very convenient for Arin.

Left all alone, he knew this was his chance. He quickly got dressed in his favorite orange shirt and ran back to the cavern. His surfboard was exactly where he left it.

When he arrived at the beach, the sun was shining brightly, it was going to be a hot day. He had never been on a surfboard before and had no idea how to use one, so he did what anyone in his position would do and sat on top. He paddled with his hands out into the ocean and before long he noticed that the beach had become distant. As he was unable to swim, he started to get worried and tried to return to shore. But the tide was too strong and as he became too tired to fight the current, he was brought further out to sea.

Out of nowhere a big wave came and swallowed him into the ocean. Struggling to swim, a beautiful red haired temptress came to his aid. Unsure if he was hallucinating, Arin stared into her eyes. He felt a grasp on his arm and began moving through the water. When he woke up he was lying on the shore, shirt on his head with surfboard beside him. He wasn't sure what had happened but he was pretty sure that he was still alive. 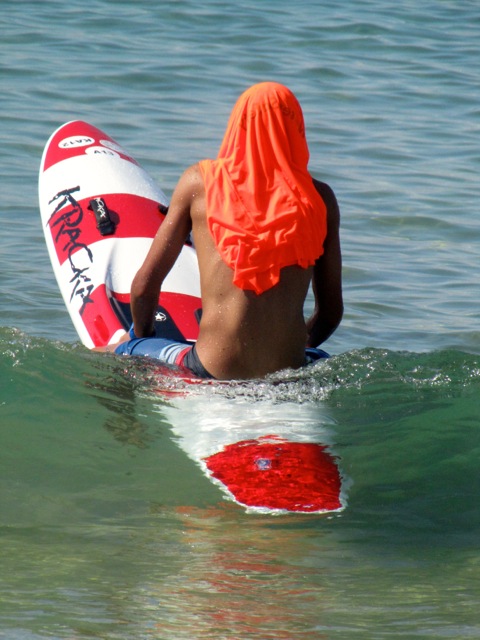