He doesn't want to come out - it's too cold! Is that snow? He can't come out, that hole is too small.

Is that a dog? Brrr... That door looks small. I had a dog once, he died. He probably has to go potty. He's not coming out, it's too cold. My dogs name was Happy.

His name is Lucky. I think we should name him poopy, or winter. Let's name him Happy, that was my dogs name, she looked like that. I'm hungry, is it time to eat yet. Where should I go, nobody tells me anything.

The dog is cold, yes - he's cold. He wants to stay in where it's warm. I bet he'll go inside - he can't get out that small hole. He's warm inside.

I think he lives alone - that's why he has the hole to go out by himself. He lives with kids and a mom. Can he come live here with us? I don't like dogs, don't bring him here. Can we pet him. Where am I suppose to go - where can I get a toothpick? He lives with his family - yeahhhh, his family.

They live somewhere cold, like Iowa, like here somewhere. Maybe Alaska, I lived in Alaska, worked on the poles. It looks like a poor house, maybe the dog is homeless. Maybe it's a dog shelter or a jail.

I think it's warm inside the house, I think they are cooking gingerbread, for Christmas, the dog has to go potty though.

The dog wishes it were summer so there was green grass to go and play or swim. I think the dog likes the snow, he's wanting to go out and play. He wants to eat the gingerbread first. Maybe he's waiting for the kids to come home from school. Or his master to take him out. I still think he just needs to go potty.

ohhhhhhh yes - somebody will let him out, poor dog. That's Happy - I use to have a dog just like that, her name was Happy. We never had a dog - I wanted one but I was allergic. Is it time for lunch? 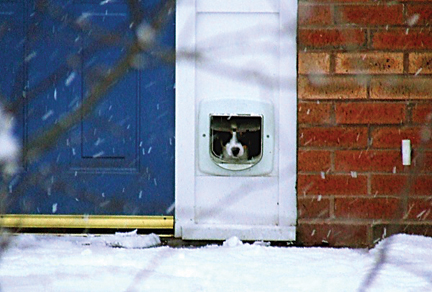