I can’t tell if it’s a boy or a man. It could be someone in New York. His name is Sam. He’s flying a kite (because he’s nuts!). He gets around a lot because he knows several people he can help. He’s very small about three years old. He’s doing it for fun. There’s lots of other reasons. He wants to do more than his Mom and Dad. In other words, get into trouble!

He has a family. My kids have always gone to work. He’s pretty young, too young to work. He has a Mom and a Dad. He has no brothers and sisters. He has three brothers and sisters. They’re the type of people who like to keep their family together. If they decide on a price, they’re going to charge them ahead of time. His parents are going to prepare him well for life.

His mother is probably a nurse and his father is a teacher. This could be true. His father could have taught him how to make the plane. The kids will have to spend some money in order to get along. He’s a playful kid. He’s going to grow up to be a pilot or a doctor. He’s going to take his talents far. He’s going to get an education on how to talk to grownups.

Children about that age, 6-7 years old, are dreaming about the future and what they want to do. He likes to be with his planes. He’s going to fly. The family flies all over the place. They all get in the plane and talk to each other and “off we go!” He’s going to run through the grass and try the airplane and see if it flies. He’s going to decorate the plane. He’s going to paint the plane red.

We would hear the sound of the plane, his parents, and he’s an excited little boy and almost anything could come out of his mouth. We would smell fresh air, fresh grass, daisies, plane exhaust.

Ten years later…he’s actually going to do some flying and have that experience. 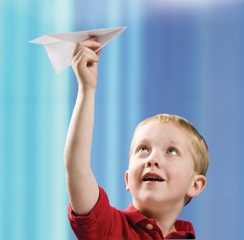