In this story, there is a man named José and he looks Chinese. He is taking his sheep to the market to purchase some cheese, sell some cheese, and to also sell his sheep. The sheep is on José’s back because he doesn’t have a car to drive. They are smelling all sorts of things such as diesel fuel, city odors, and tons of food. The man is selling his sheep for money to get a car and to also get a dowry to marry his wife. He met his wife at the hog farms. HIs wife is big, fat, and wobbly. In the hog farms they fatten the hogs. The sheep’s name is Billy Willy, Desperado, and Watch. They’re in a rush bc José wants to sell Billy Willy. He’s trying to get to the place as fast as he can AND the sheep is very apprehensive. The sky is twilight. He has a car and it goes really fast, he also has a watch on his arm, and he is a really nice guy. The sheep is his lover. The sheep is apprehensive and hungry. José is trying to go fast to meet up with Stevie Jo, who is a man who has a business. José wants him to cater his wedding because Stevie Jo offers crabs, gumbo, oysters, and boodan. José is going to have a christmas wedding. The wedding is going to be an all white wedding. There will be bridesmaids, and grooms, and his wife will wear a beautiful dress. There is going to be approximately 400 people there. They will serve everyone lamb chops. Lamb chops are expensive! “Thank God they are not human chops” says Carolyn. If there are cannibals at the feast it will be an interesting one.
There is a lot of things going on. José is trying to get out of the place, because there is a lot of things going down, It is a pretty bad place, he will try to get out of there very fast. He needs to get out of the place that he is currently in, and he desires to return to the place that he was in before. He is a kid. He is a teenager. He is probably in a place where he is in a really good place. José goes to a market with Billy WIlly. At the market José crashes his bike into a stall with apples and oranges, and they fall around. José tries to pick them up and the sheep tries to eat them and at the same time the sheep is also pooping. “Supper is not going to look so good”, says Beverly. His mother in law is upset because she wants the sheep to eat so that she can sell it for a better price. He tells his mother-in-law if you let me keep the sheep I’ll take care of your daughter but if you don’t let me keep the sheep don’t go to sleep at night or…They are running away from something to a safer place. There, they are happy and secure until they hear a small baah baah, they notice a baby sheep crying. The baby sheep had been trucking along behind them he was tired and then he caught up.
José is going somewhere fast but we don’t know where he’s going, he had something strange on his head. He’s going somewhere important! Is that an arrow sticking in him! Or under his arm? Or is it s rope wrapping around his body “They are rushing him to the hospital” says Sue. Up above in the room in the building is a place where a bad guy is, it looks like something sinister. The plot thickens says Beverly. This is a Thursday. There is a shadow on the window (jaws theme music). This must be a person who likes goat chops. He is trying to shoot the goat off of the bike. José gets a flat tire so he has to stop so the sinister guys sees it is time to make a move so he runs after him but he trips then he gets up. 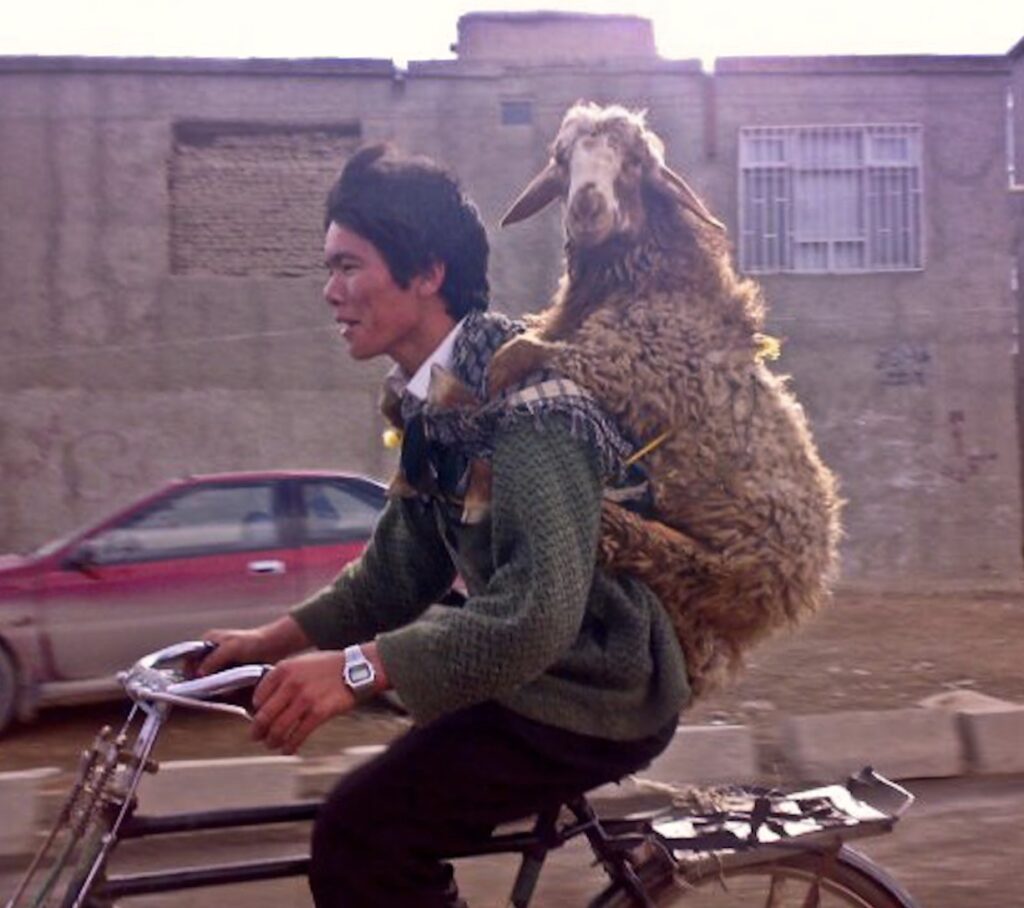