He's going out to dinner and maybe running a little late. He's going to eat Chinese food when he goes out to dinner. Takes place in Minnesota in the Spring season.

People are running away but not sure what from. Moving out fast. Maybe you could hear trucks and bicycles hitting or running into each other. It's a guy on the street. Is that you? No, but it could be. He's coming out of the outhouse. He's running for a reason and that would be a good one. He's getting out of the way. He must have saw a fire.

I smell burning trees, burning grass and smoke. Take another drink of whiskey! He's been drinking! He's a fool. He came out of a hole. He's scared. He's chicken. Let's call him Skip, the drunkard. I think he is on a cruise ship and the Captain could be watching him. Ah, heck! He's scared and trying to get out of there real fast. He's scared of pretty ladies, like you, trying to take his money.

He has a family. They are on the ship. His parents, wife and kids and smoke from the fire. The fire is in the house. He has a part for the boat. Then they're going to have a party. He's running away. Something is keeping him from staying. He's out pacing himself. he's got one leg up and one leg down. He's really moving out with a scared look on his face! He's running from the fire.

I don't know what he is thinking. We are looking at the same thing (picture) and there is absolutely no way to tell what he's thinking. He's running as hard as he can run. 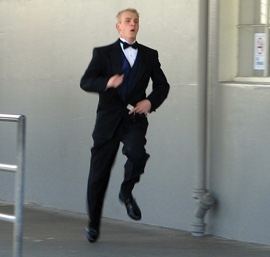