Rotten fritters in a barn

Somewhere in a Southern state – Kansa, Atlanta or Georgia, we think – during the Great depression, Sally Cries (who’s 6) and her hen named Ethel are hanging out. Actually, Sally’s hiding from Ethel because she’s trying to get the eggs and Ethel for sure won’t like that! Sally’s hiding in her apron (something (does she have the effs already?!) Ethel is squawking!

There’s an old corn cob on the ground (she’s maintaining a healthy diet of corn, obviously) and Ethel’s eating all the kernels. Ethel’s got some friends on the barn – a duck, a dog, a horse and a cow. Holy cow, says Sylvia.

Something else – a fox? – is hiding in the chicken coop. Devious little things, they are. Waiting for some fried chicken, says Steen, but there’s no beer. The fox will go for the neck! With a fox in the coop, the chickens are stressed, and are flying around. The chickens are trying to reach the high loft to get away from the fox, just like the birds do. Once they get to the loft, it starts to get funny. “Who crossed the road?” they say, trying to make light of the whole situation.

Steen went to stay in Denmark when he was young. He remembers that, but Sylvia says she sure doesn’t because why would she? He was only four, and went across the water in an airplane. Where he went, they had a lot of chickens and they sell ‘em or kill ‘em, it didn’t matter. Steen says he ran from nest to nest, stealing all their eggs just like Sally (six per basket) to take them back to Mom. But then they weren’t sure whether to take them or leave them be, but it was so much fun! 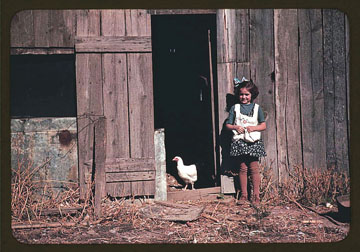