It’s a watery canal in Venice, Italy. The guy is crossing to get to dry land. Those are pretty big stones so it would be easy to pick up and walk along. You can throw a stone somewhere. Come back here in front of him and cross there. It’s springtime. I think it might be fall because the water would be deeper if it were spring. I hope he does not fall because it looks like he is pretty sure footed.

He’s headed back to the club house. It does not look like there is coverage either way. He’s going back to get coverage. He’s going to have a club soda! If he keeps using the stones he will get where he is going.

He looks hungry. Has he been eating sandwiches lately? Put down a piece of bread and put a tootsie roll on top and eat it.

Other people are going to be there to meet him. You might want to try Molly. He’s going to play golf with his buddies and you might bring him home with us. He’s going to the Fish Warden for a contest. Let’s call him Chip. He’s nicknamed Potato Chip!

It’s cold there. Autumn. The weather is changing stone by stone. Prancing along as they were one by one on the stones. He has summer clothes on. It’s real heavy. They had some kind or problem in the water. You can see it right there in the water.

He looks peaceful to me. There are different levels of things and we should just let it float to the top…and take care of itself. I hear the seagulls, “caw, caw!” Oh God, just another Blue Jay! 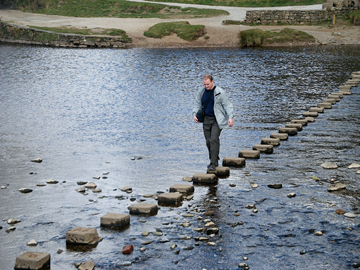