This takes place on a river or at a beach. The breeze is there. The wind is coming in. It’s summertime. There are 2 people there. There’s a reflection in the H20. One has his hands in the air. They’re just doing what they do best in TX. There is a person below who is somehow related to the person above who has bright red hair. The person below has dark brown hair. Both are swinging out with their hands up.

This guy feels happy because he’s at the beach and that is enough. Once upon a time I enjoyed the beach too when I was pretty young. There are two people above him and it also looks like there might be a dog below. There might be Japan in the near distance.

I would hear “help!” (laughter). Look at him…he’s bent out of shape. If the game warden was there he’d be standing there waiting for the guy to come down because it wasn’t their season.

I would hear the ocean waves and the seagulls. I would hear eagles. Can you make the sound of an eagle? Caw. Caw. Caw. How about a seagull? Cawwwwww. I hear birds chirping. It’s a peculiar smell of kelp, fish, and a mixture of all those things that come from the ocean.

He was running and setting himself up to do this. He was probably talking to his friends because I doubt he went to the beach on his own. And that shadow below him is his reflection. I would say He’s about 15. I think he’s about 25. Right before he jumped he got bit on the toe by a gooey duck. laughter).

I’m wondering if he’s older than I originally thought because someone is taking this guy’s picture. If he’s under 21 he would need parental consent.

Have you seen the teeth of a gooey duck? He better be swimming when he hits water or the next picture would be an ambulance. He would land on the ground and not go anywhere. He would still have his arms up in the air. Right before he jumped you can see the line of dirt going up to his foot and the dark mark on the ground. 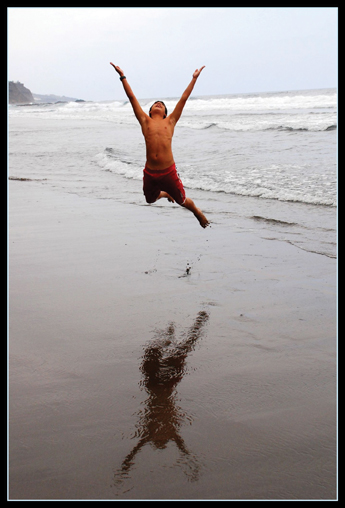