Is the dog a male or a female? A male. You don't let a female dog out on the street, not in this neighborhood! He's a young little dog. He's got that hound mixed color, those spots like on a hound. The spots are staggered around his body. He might be on the terrier side, a mix, a mutt.

He's listening to the engines of the cars and trucks going by. It's a combination of things. He's looking and listening. He's no dummy. He's got a short tail. He's got bigger paws than some dogs.

We don't know his full capacity yet. He's only a pup. The young man, the owner, is going to be Bob's teacher. We can give him a name. The owner's name is Denny. "Come on, get back here, little dog." Denny is the man the dog is living with as a "coming up" dog. 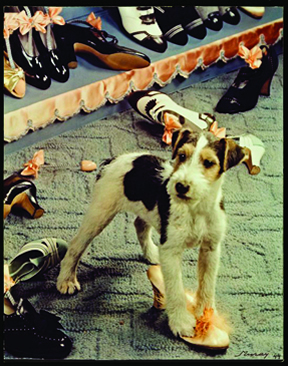