The Grandfather with the Magic Dust

There was a couple walking along in the woods. They came to a beautiful tree and noticed that, gosh,  there was a fellow hanging out in the branches - way high above them. The couple is married and they have been for 15 years. I think that’s their grandpa up in the tree. They are two dudes so it’s kinda like a modern tale.

I’m looking at the tree and it looks almost metaphorical or symbolic in that it’s been broken off and damaged. Part of it is dead but part of it, where the grandfather is sitting, appears to be healthy and is full of spring bloom. I’m not sure what the significance of it is… but it’s a very stark contrast. It looks to me like the old man is sprinkling something on that tree - something that is transforming that dead tree into these beautiful blossoms.

I think the people on the ground think he’s a little bit crazy. They’re not sure what he’s doing up in that tree. He’s their grandfather so they’re quite worried. I reckon their plan is to try to get them to come down. They are  seeking some advice - but… maybe … some wisdom from this old gentleman. They would like to have a baby. Maybe his magic dust will help. Ahh. Umm…. They’re a little nervous that he might fall off because he’s so high.  The men on the ground are named Bob and Jim. It seems kind of clear to me. No one actually knows the old man’s name. He’s the Grandfather to All. He’d like to be able to get down safely as getting  up is sometimes easier than getting down. (I think) he’s hoping they’re going to help. But why would he be putting himself off balance by sprinkling? He’s still sprinkling. Maybe he can fly or at least  levitate.

It looks to me as if the birds might be being drawn to the tree and to the old man cause otherwise why would those birds be included in that picture? They may be flocking towards the tree or towards the old man. He may be calling them. I don’t know… with his dust. He could be. They seem to be an important part of the picture. I’m not sure. I think they’re coming towards both the tree and him. It may have something to do with the quest that the married couple are on. I’m not sure but… they are  in the middle of the countryside so it’s very peaceful and calm. You might hear the call of the birds. I think there’s a chickadee around there somewhere. You can also hear the beating of wings - the  strong beating of wings. There are also  those grasshopper, crickety sounds in the grass. There might be a stream burbling nearby.

Do you think the couple have some kind of quest and they are seeking something from this “Grandfather to All” or are they just coming upon this scene? It feels like they’ve been drawn together and are there for a reason. The outcome of this meeting will be fertility!  It seems to me that the dust that he’s scattering could be something that would encourage fertility or lushness or life. The birds are going to come and line themselves along the tree then just lightly step themselves into a stairway for the grandfather to get down.

I think the old man is  quite benevolent and that he will listen to their request. He  has the power  -  some transforming powers  - and will be able to help them. I think so.  He will help them …but he will give them a little talking to first,  as there’s a couple of things they haven’t been doing very well. They’ve been a little greedy or a little unkind and he’ll give them a little hoohah first. 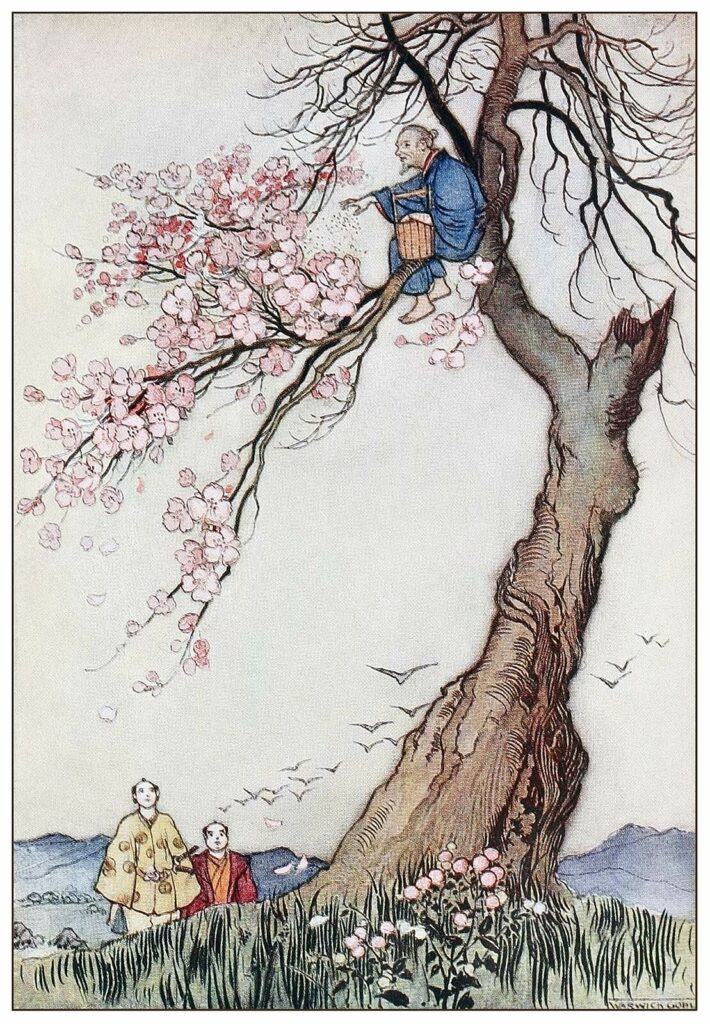