Long ago, a lonely child's toy turned up in a pile of debris across the street was a mansion in a small town. It appeared to be an animal of some sort sitting on possibly a tire.
It was a partly sunny day and this animal, maybe a bear, was perched on a pile of wood and a tire from a bicycle. The bear was fuzzy and clean. Across the street from this so called junkyard was a beautiful mansion filled with a lot of surprises.
There were children playing in the playroom with many types of toys. Outside toys were scattered everywhere. There wasn't any fence surrounding this mansion. The bear must have fallen off of the kids' bikes possibly. Perhaps one of the children would notice that their bear was missing.
The next day everything in the mansion was different than usual. Almost as if things and items were shifting on their own. It was apparent that the mansion had some magical powers.
As the boy looked out the window, the bear-like image in the junkyard appeared to be waving, as if calling the boy over. He darted outside, heart racing, as he skipped across the street and the bear leaped into his arms as if he had known him for years! The boy was shocked! Could it be a live stuffed animal?
The bear whispered in his ear as he hugged him,"Let's hang this up and make it into a tire swing."
The boy went back to get rope. To the bear, it seemed to take forever but only a minute had passed The boy hung the rope and tire from a nearby tree so they could swing back and forth.

Hours went by and magically the bear began to speak! As the sun started to go down, the boy had to leave but promised "Bobaroo", the name given to the bear that he'd be back
The next day the boy returned to find the pile of debris bulldozed. No bear in sight! Where could he have vanished to?, the boy wondered.

He felt miserable and sobbed. No where to be found, he ran back to the mansion to his bedroom and slammed the door shut. As he lay in his bed, suddenly, Bobaroo came from out of nowhere! "I snuck in last night", said Bobaroo. "I knew the city was going to bulldoze it to make a teddy bear store."
The boy knew at that moment that he and Bobaroo would be best buddies forever. No one claimed Bobaroo and the boy noticed that Bobaroo acted more like a stuffed toy when others were around.

For many years, Boxboro's special powers remained top secret between the bear and the boy.

Eventually, the boy grew up and left the mansion. He had his own family, leaving his friend behind as a gift for the next child who would be so fortunate.

Ten years later, a drive past the mansion and sure enough, Bobaroo was dancing in the same bedroom with another boy.

It crossed his mind in that exact moment that he would never forget that special bear with magical powers that touched his life very much and continues to bless other children.
Also created by three of Lorraine's friends from the Goodwill Day Service program in Waukesha 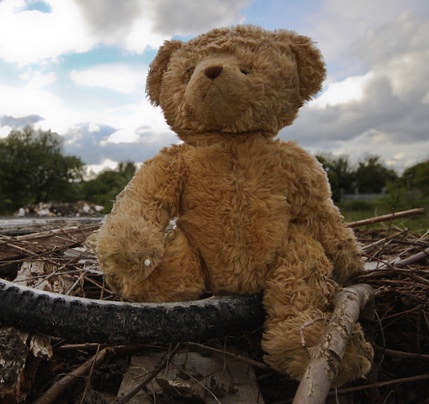