The Music Man on the Footpath

Vittoria calls this instrument a fisarmonica. Doug calls it a piano accordion. It has two keyboards, with buttons on one side for the sound. A young boy is playing it outside of the house where he lives. He’s playing for money. Vittoria says he’s playing to make people happy, too.

There is a money box in front of him. Every Sunday people come to visit and the boy plays music and people dance. The boy’s name is John. We don’t know how old he is. He could be eight or twelve.

Sometimes he plays sad music. He also plays for people’s birthdays. Then he plays happy music and people dance and drink.

John will buy food with the money he makes. Sausages are his favourite. He also gives some of his money to his mother and father to buy food.

It’s a nice day. It’s not too cold because John is wearing short sleeves. It’s taking place in Sydney, Australia. He also has a harmonica that he plays.

John looks like an Egyptian. If he had a dog, and someone tried to take the money, the dog would bite them on the bum! 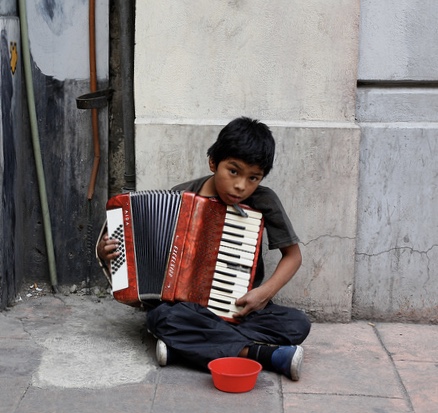