“I can jump higher than you can!”

Happy now, but not when they leave. Going up is fine but coming down is hard! They feel daring. I don’t know if they’re all boys—Billy, Bob, and Jim. They’re friends. They met in school. It looks like the beach. They’re flying in the air.

It would be a hard beach. Maybe it’s Allen County dirt. It’s not pretty white sand. It’s the old, marshy grass. The roar of the ocean.

The parents say, “Stop doing that!”

It’s in the summer, daytime. It looks like a clear, cloudless day, probably the last day before school. They’re probably trying to break a bone. There’s somebody around—a lot of people. They’re gonna bandage their knees and go swimming. They’re in different positions—they’re flying in the air. On the way to the beach, they got a car and did the up-down. They were gonna do the YMCA, but they were short one.

They’re all jumping at different heights. After the beach, they’ll go to eat (and to the hospital). Not old enough to go get a beer, but their parents are off getting one. They’re flying in the air. It looks like they’re not holding on to each other. I’d like to be there with my toes in the sand (if it were pretty, white sand). I’d rather go south, like to Daytona. They wish for a soft landing, not to fall and hurt themselves, that girls were somewhere nearby. They want some cheap food. Their legs are in different positions.

The girls say, “Those guys are idiots. Surprise, surprise.”

They get along well. They look like they’re different ages, a little bit—12, 13, 14, they’re in their teens. Gee, ain’t it funny how time slips away?

One of them’s the leader. The rest of them followed. 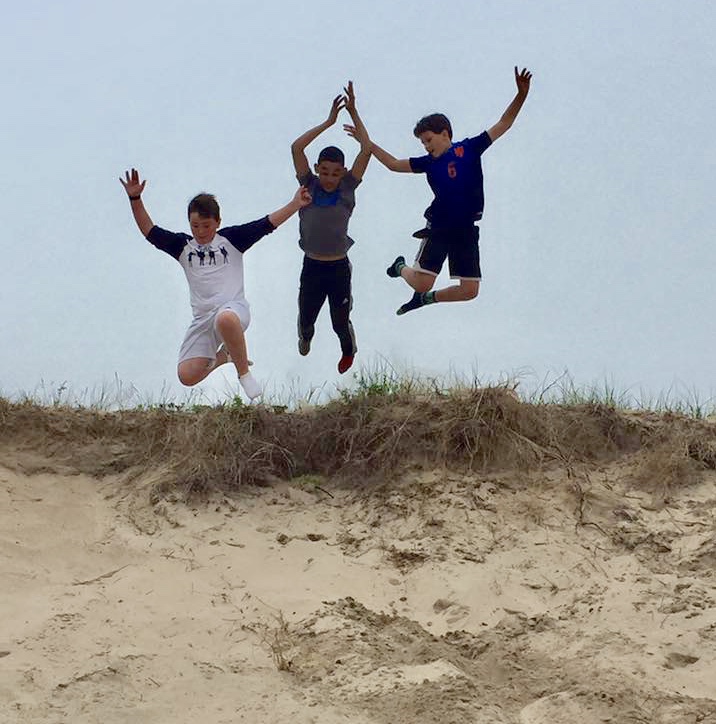