The way back home

This picture takes in a MRT (Mass Rapid Transit). It was after work about 5 to 6pm, they could be shift workers. The train was not so crowded, it can be either in the evening or morning. In the morning because some are going to school.They are named Morgan, Sleepy and Kumar (from left to right). They are trying to catch some sleep. The looked like in their 30s and the one in the middle looked like only 15 years of age. The guys are thinking why they got scolded by their bosses. They maybe thinking what their family members are doing.

The first and last gentlemen were married and the gentleman in the middle should be still single. Both Indian gentlemen have at least 1 to 2 children, they looked happy.

The 2 Indian thinking of their families who are back home. They all carry bags, there maybe iPad in side the bag, maybe water bottle, maybe clothes which they changed before they went home after work. They may have their breakfast kept in their bags.

There were people walking into the train before this picture was taken. The Strait Times photographer took the picture. Train is running and the environment very clean. The photographer wants to capture people in the train and how they behave. The second and third gentlemen were sitting on seats me ants for seniors, they were pretending to be sleeping.

They should be sitting in the light green coloured train cabin. Those who work are very very tire, work till 11pm so they closed their eyes. it shows others working conditions in Singapore, heavy and tired, long hours of working. Not sure what will happens... 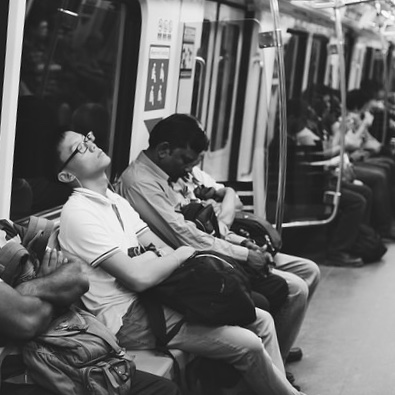