They Can Hardly Wait to Get There

Vancouver! Or Victoria. But probably Vancouver, because it’s a big, beautiful city. Is that a Roman aqueduct? It probably couldn’t be...but I’m hanging on to that.

Mud and dust...moving down the road. They’re pointed in the direction of the sea – why not say there’s going there? Maybe it’s a hot day and they want to cool off. But they’re so heavily dressed, relatively speaking.

They’re carrying bales of something...some kind of wheat, or water. (Could be!) They’re carrying them because it’s on top of their heads! The third or fourth one on the left has a basket that’s all stretched out. They’ve stopped on the road for someone else, for the one with his hands in the air. (Possibility!)

The people are . I wonder why! It doesn’t look like a picnic, does it? And their jackets are flying all over the place. 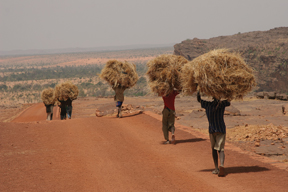