Too Lonely a Road

They are not far from the beach.

Looks like a chubby kid. Looks like someone who is heavy. Could be any type of person.

It kinda dark. Better go and take another picture. Boy you really have to use your imagination!

You can't tell what they're doing. They can do anything. You can ask them. Call them up. You've got a telephone.

You never got their names. Call them Frick and Frack. Thing 1 and Thing 1. Dr. Seuss.

Tell us where they live. They are all by themselves. They're scared.

What are those little kids doing? One is a child and one could be a parent. The girl is a mother and the boy is a little boy. He was running away and she was catching up to him. Likes like she is going the opposite way. He's leaving school before he is supposed to. He's lost a lot of weight. She's going to take him home and he will have to talk to his father!

It looks like fog. It must be night we can't see them. Or maybe late summer...or late evening.

Tell them to send another picture!

The more you look at it the harder it is to figure it out.

It's two little girls. Or maybe little boy and a girl. Maybe they are boyfriend and girlfriend. The boy is going one way, the girl, the other. That's easy enough to see what's going on here; that's it.

It makes me sad because I can't walk the beach anymore. I loved to hear the surf. Every so often I would hear a tanker going by or the tugs whistling back and forth to each other.

It's cool. It's winter. They have coats; big coats.
She looks like she has her hood up. They wouldn't have a jacket on if it was a beach. They would have a swimsuit.

They're fighting. One doesn't want to go to the ocean. Why? Because one is a bird and one is a fish. 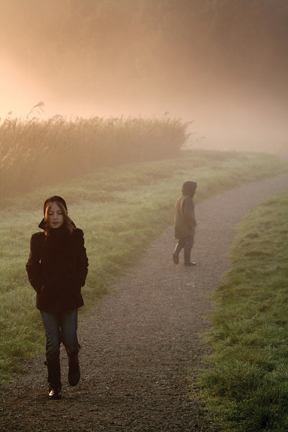