The person on the left is Bill, on the right is Chow
Australia, in a forrest
Summer, December because the trees are green and its sunny
They were on vacation, taking walk like everyone else in Australia forrest, tour
Could have met previously to this, but this is the start of them being
Wooden board walking path, lined with granite, unknown what the white tubes are, maybe they are steps going up the hill
They are photographing panda bears in the wild, that is so unique they can't believe it, panda bears typically aren't in Australia
One of the pandas is resting, one is chewing on bamboo
Bill and Chow are random tourists, they are not professional photographers
They are strangers to each other
The people in the background are also tourists, two girls, friends
Chow is a professional soccer player- takes it back because he is not in shape, has a tummy
He is actually a marketing executive
Bill is a minister- clean cut
Other animals they might see include koala bears, kangaroos, dingos
Smells of nature- dampness, vegetation, rotting
Hearing- birds, wind going through the trees, rustling of the leaves, sounds of small animals making soft sounds and rustling, catching conversations of other tourists walking by
Bill and Chow are going to start talking to each other, talking about picture taking, discussing what the pandas are doing, they may not speak the same language, talking about photography techniques
Bill and Chow become friends, speculating a lot about the pandas and the cameras, have common interest of picture taking, experience with photography
Stay in touch, be pen pals
Learn about each other, get to know each other
Bill is from the U.S.
Chow is from Asia or U.S. or England or France
The pandas were on a flight to a zoo, they escaped from the airport while people were distracted
Pandas spotted a truck with some bamboo in it, they hitched a ride on the back of the truck because they were hungry
The pandas were tired after, eating up their bamboo, they don't know what they're going to do next
They won't stay in the Australia because they will die if they don't maintain specialized diet, someone will come and save them and take them somewhere more appropriate
Bill and Chow would be taking pictures with smart cameras in todays time to show the tour guide that the pandas needed help
Bill and Chow could be potential rescuers of the panda
Maybe they are repairing the walkway into a bamboo walk 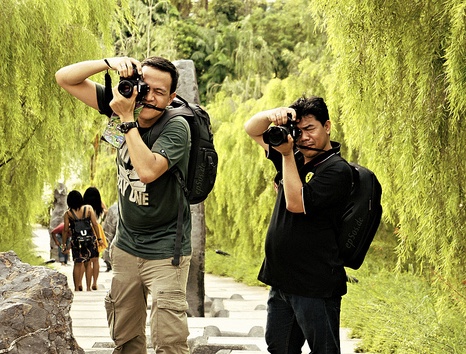